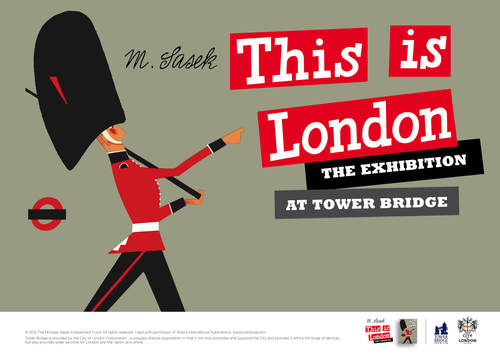 In this special exhibition, which runs from 29th March 2013 to the end of March 2014 Tower Bridge brings the popular book 'This is London' to life

Tower Bridge is delighted to present ‘This is London’, a family-friendly exhibition featuring the internationally acclaimed illustrations and playful prose from Miroslav Sasek’s classic children’s book. First published in 1959, Sasek’s charming, child’s-eye view of London’s sights, buildings and people form an affectionate portrait of the city which has enchanted generations of children and adults.

In this special exhibition, which runs from 29th March 2013 to the end of March 2014 Tower Bridge brings the popular book 'This is London' to life, in partnership with the Sasek Estate and Rizzoli International Publications. The printed reproductions of Sasek’s jaunty artwork are complemented by information about London today, allowing these charming and evocative images to be your guide and see how much (or how little) London has changed since the 1950s.

All set against the backdrop of the incredible views of the city from Tower Bridge’s high-level Walkways, a number of famous landmarks featured in the book can also be seen from the exhibition space – which ones can you spot? Look out for St. Paul’s Cathedral, The Monument and, of course, Tower Bridge itself!

Be inspired by M.Sasek! There will be colouring sheets and stations provided in the exhibition or you could create your own masterpiece. Send us your artwork and we will post it on Facebook!

Key Features of the Exhibition:

• Images include: Buckingham Palace, Big Ben, the Houses of Parliament, Billingsgate Fish Market, St. Ethelburga’s Church, Piccadilly Circus, the London Underground, the Tower of London and Trafalgar Square, alongside photographs of and information about what you can see today;
• ‘Can You Spot’: Pointers on the panels help visitors identify landmarks that are in the book and visible from Tower Bridge;
• Internationally accessible: All additional information on the panels is available in French, German, Spanish and Italian.

Miroslav Sasek
• M. Sasek was born in Prague in 1916 and died in Switzerland in 1980. He worked as a painter and illustrator for most of his life.
• Starting with ‘This is Paris, published in 1958, the books he wrote painted a delightful and evocative picture of some of the world’s great cities (and countries).

Tower Bridge
• Tower Bridgewas the creation of architect Sir Horace Jones and civil engineer Sir John Wolfe-Barry. It took eight years to complete and was officially opened on 30 June 1894 by the Prince and Princess of Wales (the future King Edward VII and Queen Alexandra).
• Tower Bridge Exhibition is open every day from 10.00am to 6.00pm (April-Sept) and 9.30am to 5.30pm (Oct-March) with last admission half an hour before closing. Admission prices for Tower Bridge are adults £8, children aged 5-15 £3.40, under 5s free and concessions £5.60. Special group rates available.
• The nearest underground stations are London Bridge or Tower Hill.
• Visit our website at www.towerbridge.org.uk or join in the Tower Bridge conversation on Facebook and Twitter. We would love to chat!