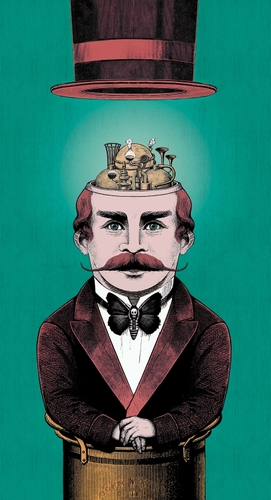 Visitors can expect a show that is both playful and thought-provoking – a phantasmagoria of the all the neo-Victorian things in our lives.

From the macabre to the surreal,'Victoriana: The Art of Revival' is the first major retrospective of Victorian revivalism and a mind-bending, multimedia exploration of Victorian influences on modern works of art. Featuring graphic design, film, photography, ceramics, taxidermy, furniture, textiles and fine art, this fascinating multi-media, multi-sensory show at the Guildhall Art Gallery, provided by the City of London Corporation, explores the work of contemporary artists who have been inspired by the 19th century and offers an intriguing perspective into the on-going cultural legacy of our Victorian forebears.

The Guildhall Art Gallery has built a reputation for its outstanding collection of Victorian paintings and this new exhibition offers an original dimension to the gallery’s exhibition programme by bringing together 28 major contemporary artists, including Yinka Shonibare, Grayson Perry, Paula Rego, Dan Hillier, Paul St George, Rob Ryan, Kitty Valentine and Jake and Dinos Chapman, who encapsulate the essence and diversity of Victorian Revivalism.

Combining past with present, the exhibition has four major themes: The Neo-Victorian Identity; Time Travel; The Cute and the Curious; and The Reimagined Parlour and will feature over 70 works. These include the entertaining ‘Geistlich Tube’ created by Paul St George especially for the show, which enables viewers to ‘see’ another viewer from a different part of the Gallery, Yinka Shonibare’s reimaginging of Dorian Gray, via the 1945 Albert Lewin film, Paula Rego’s sinister revisioning of Charlotte Brontë’s ‘Jane Eyre’(2001-02), Stephen Kenny’s bold pastiche of a Victorian advertisement entitled ‘Drink More Gin’ (2010), Miss Pokeno’s poignant fox-filled armchair, ‘Trophy’ (2008), Carole Windham’s whimsical Staffordshire figure, ‘Dearly Beloved’ (2012), which depicts David Cameron and Nick Clegg as Queen and Consort in a commemoration of their policies on gay marriage and the surreal ‘Octopus Portrait’ (2009) by Yumiko Utsu.

Sonia Solicari, Principal Curator at Guildhall Art Gallery, comments:
"From Rossetti to Tissot, the Guildhall Art Gallery is famous for its outstanding collection of Victorian painting. This exhibition takes a new twist on the 19th century, offering a contemporary look at the period across all media.Visitors can expect a show that is both playful and thought-provoking – a phantasmagoria of the all the neo-Victorian things in our lives."

Associated Events:
Guildhall Gothic - Go Gothic this October with our special late-evening Victorian Ball;
Tours and Talks - Join the curatorial team for a 30-minute tour or arrange a group guided tour;
Victoriana on Film - A season of films selected around the themes of the exhibition.

Sonia is Principal Curator of Guildhall Art Gallery, having previously held posts of Curator, Ceramics, and Assistant Curator, Painting, at the Victoria & Albert Museum. Sonia has written and lectured widely on Victorian art and culture and on revivalism in art and design. Her most recent essay, ‘Towards a Neo-Victorian Interior’ can be found at http://pastinpresent.courtauld.ac.uk/past-in-present-iii/. Sonia is the editor of the forthcoming publication ‘Victoriana: A Miscellany’, Guildhall Art Gallery, 2013.

‘Victoriana: A Miscellany’ is an assemblage of fact and fiction, words and images around the themes of the exhibition, with contributions from leading writers, artists and commentators.

• Located in the heart of the City, next to the medieval Guildhall, the Art Gallery houses and displays paintings and sculptures collected by the City of London Corporation. Visitors can view the highlights of this historic collection, including iconic Victorian paintings and fascinating scenes of London life from the 17th century to the present. Steeped in history, the Gallery also houses the remains of London’s Roman Amphitheatre, which was discovered here in 1988 and is open to the public.
• Guildhall Art Gallery and London’s Roman Amphitheatre, Guildhall Yard, London EC2V 5AR; Tel: 020 7332 3700
• Admission: Free to the gallery’s permanent collection and the amphitheatre. Admission to ‘Victoriana: The Art of Revival’ costs £7 (£5 concessions).
• Open: Mon-Sat, 10am-5pm, Sun 12-4pm.
• Visit our website at www.cityoflondon.gov.uk/victoriana and join the conversation on Facebook at www.facebook.com/GuildhallArtGallery; or Twitter @GuildhallArt. We’d love to chat!
• The nearest Underground stations are: Bank, St. Pauls, Mansion House or Moorgate.

• The City of London Corporation provides local government and policing services for the financial and commercial heart of Britain, the 'Square Mile'. In addition, the City Corporation has three roles: (1) it supports London’s communities by working in partnership with neighbouring boroughs on economic regeneration, education and skills projects. In addition, the City of London Corporation’s charity, the City Bridge Trust, makes grants of more than £15 million annually to charitable projects across London; and it also supports education with three independent schools, three City Academies, a primary school and the world-renowned Guildhall School of Music & Drama. (2) It also helps look after key London heritage and green spaces including Tower Bridge, Museum of London, Barbican Centre, City gardens, Hampstead Heath, Epping Forest, Burnham Beeches, and important ‘commons’ in south London. (3) And it also supports and promotes the ‘City’ as a world-leading financial and business hub, with outward and inward business delegations, high-profile civic events, research-driven policies all reflecting a long-term approach. See www.cityoflondon.gov.uk for more details.