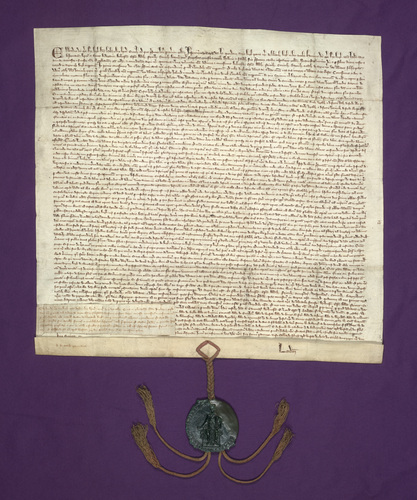 The 1297 Magna Carta will spearhead the launch of the new City of London Heritage Gallery which opens to the public on Friday 12 September. Admission will be FREE to this permanent, purpose-built exhibition space which will showcase a rotating selection of rare, fascinating and sometimes surprising documents from the extensive archives of the City of London Corporation, at the heart of both London’s and the nation’s political and social history for over 1,000 years.

Located at the Guildhall Art Gallery and provided by the City of London Corporation, the Heritage Gallery will be open daily and, looking ahead, will feature further gems, including Shakespeare’s purchase deed for a house in Blackfriars (1613) which carries his signature - one of only six known examples in the world. The Gallery will also look at the contribution made by London’s diverse communities, such as the Irish dockworkers and the arrival of African-Caribbean immigrants in the late 1940s, providing a ‘house of history’ for London past, present and the future.

As part of the City of London Corporation’s contribution to the international celebrations to mark the 800th anniversary of Magna Carta (see Notes to Editors), visitors to the Heritage Gallery will have the unique opportunity to see the finest surviving 13th century version in existence. Featuring what could be described as the world’s first ‘Post-It’ note - a superimposed memorandum which reads ‘Make it happen’ - this historic document reflects the central role of the City of London in implementing the charter. Furthermore, London is the only city specifically to be named – ‘the City of London shall have all its ancient liberties by land as well as by water’.

London in World War One

To tie in with the centenary of the beginning of World War One, the exhibition will include also a poster for a recruitment meeting held at Guildhall in 1914, the first of many to take place throughout the country following the outbreak of war, at which the Lord Mayor proposed a resolution to support the national/’s call to arms.
There is also an intriguing insight into how London changed in the first few months of the war, seen in the Minutes of the London County Council’s Emergency Committee. Food prices rose sharply, as did unemployment with the rapid decline of trades such as tailoring and the manufacture of fine goods and, curiously, excessive drunkenness amongst women across the capital was reported.

Other exhibits on display include the medieval Cartae Antiquae. An essential reference tool for medieval City of London officials, this volume contains transcripts of charters and statutes covering laws enacted from 1327 to 1425, including in the reign of Richard III, whose remains were discovered in Leicester in 2013.
The City of London Corporation also owns a set of paintings of all 25 City Aldermen who were in post in the mid-fifteenth century. These heraldic portraits show the dignity and standing of the office holders and give a fascinating glimpse of the men who governed the medieval City.

Geoff Pick, Director of London Metropolitan Archives, comments:
“The Heritage Gallery is a wonderful opportunity to highlight not only the City of London's stewardship of archival treasures of national significance but also its pivotal role at the centre of London's and the nation's history.”

• The Heritage Gallery is a new purpose-built exhibition space at the Guildhall Art Gallery. Located in the heart of the City,
next to the medieval Guildhall, the Art Gallery also houses and displays paintings and sculptures collected by the City
of London Corporation. Visitors can view the highlights of this historic collection, including iconic Victorian paintings and fascinating scenes of London life from the 17th century to the present. Steeped in history, the Gallery also houses the remains of London’s Roman Amphitheatre, which was discovered here in 1988 and is open to the public.

• Please note that the Guildhall Art Gallery will be closed from 1 August to 11 September.

• The City of London Corporation provides local government and policing services for the financial and commercial heart of Britain, the 'Square Mile'. In addition, the City Corporation has three roles: (1) it supports London’s communities by working in partnership with neighbouring boroughs on economic regeneration, education and skills projects. In addition, the City of London Corporation’s charity, the City Bridge Trust, makes grants of more than £15 million annually to charitable projects across London; and it also supports education with three independent schools, three academic schools, a primary school and the world-renowned Guildhall School of Music & Drama; (2) It also helps look after key London heritage and green spaces including Tower Bridge, Museum of London, Barbican Centre, City gardens, Hampstead Heath, Epping Forest, Burnham Beeches, and important ‘commons’ in south London; and (3) it also supports and promotes the ‘City’ as the world’s leading international financial and business centre, with outward and inward business delegations, high-profile civic events, research-driven policies all reflecting a long-term approach. See www.cityoflondon.gov.uk for more details.