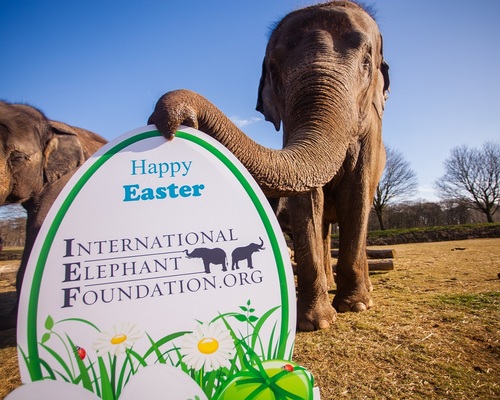 Woburn Safari Park is hoping to raise more than £10,000 in vital funds on behalf of the International Elephant Foundation

Asian elephant herd is encouraging a token of appreciation at Woburn Safari Park.

The beautiful Asian elephant herd at Woburn Safari Park will be championing the plight of their wild friends and relations as the ambassadors of Elephant Appreciation Weekend, which is being held at the Park over the Easter weekend (Friday 3rd April to Monday 6th April 2015).

Woburn Safari Park is hoping to raise more than £10,000 in vital funds on behalf of the International Elephant Foundation, which funds scientific research, education programmes and the protection of elephants for future generations.

The Park’s beautiful elephants, including their most recent addition, six month old female calf Tarli, play a pivotal role in the preservation of their species, which is endangered in the wild due to the loss of natural habitat and disruption of migration routes.

The Elephant Team at Woburn Safari Park, who are helping raise awareness of conservation efforts in situ in both Asia and Africa, will be providing educational talks and demonstrations throughout the weekend. Guests will also be able to support the International Elephant Foundation by taking part in a range of fabulous elephant-themed activities and exciting games in return for a small donation. There will also be lots of prizes to be won.

Drew Mullin, General Manager at Woburn Safari Park, commented: “Woburn Safari Park is committed to raising awareness and supporting important conservation projects including the International Elephant Foundation (IEF). Our elephant herd are a shining example of this and are genetically very important to the long-term preservation of their wild relations. We are hoping as many people as possible are able to join us and contribute to this fantastic cause.”