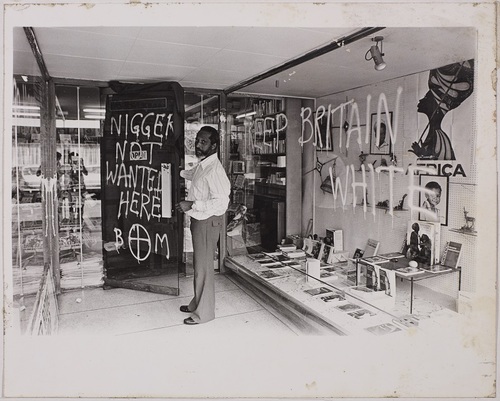 Details: Press are invited to attend a preview of the exhibition and will have an opportunity to interview pioneering Black civil rights campaigner Eric Huntley and the curators of the exhibition.

RSVP: If you are interested in attending, please email Francesca@aneelarosepr.co.uk or phone 07748 654134

‘No Colour Bar: Black British Art in Action 1960-1990’ which runs from 10th July 2015 to 24th January 2016, is an innovative look at Black British cultural identities, heritage and creative voices and the struggle Black British artists faced to have their voices heard - from the 1960s to the 1990s.

The focus of this exhibition, provided by the City of London Corporation, will be on the life works of Eric and Jessica Huntley and the Bogle L’Ouverture Press, a publishing house and pioneering bookshop and cultural hub that they founded in 1969. Bogle L'Ouverture's output and work promoted, and was shaped by, decolonisation and the fight against discrimination. Bogle L'Ouverture's bookshop will be physically recreated in the Gallery to provide a multi-sensory, interactive installation alongside works by notable artists of the period, including Eddie Chambers, Errol Lloyd, Denzil Forrester, Sonia Boyce, Keith Piper, and Sokari Douglas-Camp.

There'll be monthly events to bring the exhibition to life and delve deeper into its themes, with a diverse range of talks, workshops and gallery tours planned. This will include the Tenth Annual Huntley Conference in the Old Library on Saturday 10 October: a youth-led, inter-generational conference, which explores the exhibition’s core themes and messages.
No Colour Bar: Black British Art in Action 1960-1990 is a Heritage Lottery Funded (HLF) collaboration between the Guildhall Art Gallery, Friends of the Huntley Archives at the London Metropolitan Archives (FHALMA) and the London Metropolitan Archives (LMA).

“We are excited to share this vital period in British contemporary history to new audiences and uncover the voices and creative vision of world class Black British artists, who were inspired by, or directly worked with, the pioneering Huntleys. To have created this culturally important archive and arts exhibition marks a valuable shift in thinking about the approach to opening up and enlivening archives and historical art collections worldwide. It’s a great moment in the history of the Guildhall Art Gallery and it’s the perfect venue and location for facilitating these important conversations and showcasing this culturally symbolic archive and thought-provoking works of art.”

*Picture caption: Eric Huntley after racist attack on the Bogle L'Ouverture bookshop. ©The Huntley Archives at the London Metroplitan Archives*

‘No Colour Bar: Black British Art in Action 1960-1990’ at Guildhall Art Gallery
• The project will create a visual record of the socio-cultural dynamics spanning the three decades by juxtaposing archival documents relating to popular and political culture - pamphlets and posters related to community campaigns, artist movements and ‘conscious’ popular entertainment, book fair flyers, LP sleeves, press clippings – with original works of art: paintings, sculpture, photographs and other relevant artefacts.
• The Guildhall Art Gallery is located in the heart of the City, next to the medieval Guildhall, the Art Gallery houses and displays paintings and sculptures collected by the City of London Corporation. Steeped in history, the Gallery also houses the remains of London’s Roman Amphitheatre, which was discovered here in 1988 and is open to the public. It is part of London’s ‘cultural hub’ that includes the Barbican Centre, the Guildhall School and Milton Court, and the Museum of London.
• Guildhall Art Gallery, Heritage Gallery and London’s Roman Amphitheatre, Guildhall Yard, London EC2V 5AR; Tel: 020 7332 3700. Admission: Free to the Gallery’s permanent collection, No Colour Bar: Black British Art in Action 1960-1990 and the amphitheatre. Open: Mon-Sat, 10am-5pm, Sun 12-4pm. Nearest Underground stations: Bank, St. Pauls, Mansion House or Moorgate. Visit the City of London website

Friends of the Huntley Archives at the London Metropolitan Archives (FHALMA)
• The Huntley Archives were the first major deposit of records from the African-Caribbean community in London presented to London Metropolitan Archives (LMA) in 2005. They were presented on long-term loan by Eric and Jessica Huntley. The main archives were transferred in 2005 with additions at later dates.
• LMA is the archive repository for the City of London and pan-Greater London region, and funded by the City of London Corporation.
• The papers consist of the business records of Bogle-L’Ouverture Publications Limited and documents concerning personal, campaigning and education initiatives of Eric and Jessica Huntley, dating from 1952-2011.
• Guyanese born, Eric and Jessica Huntley were highly politically active people both as business partners and in their own right as individuals.
• They have been heavily involved in political activism, advocacy and campaign work on an international level.
• Named in honour of Toussaint L’Ouverture of Haiti and Paul Bogle, who were figure heads of Black rebellion against the slave trade, Bogle-L’Ouverture Publications was initiated in 1968 by a committee in response to the banning of Doctor Walter Rodney by the Jamaican government, which included the Huntleys, formed in 1969, and later incorporated as a limited company in 1974.
• The archives are available for consultation without prior appointment to individuals with a valid History Card issued by the LMA. Descriptions to the archives can be found on LMA’s online catalogue (collection reference codes LMA/4462 and LMA/4463) via LMA’s website

About the City of London Corporation
• The City of London Corporation (COLC) provides local government and policing services for the financial and commercial heart of Britain, the 'Square Mile'. COLC provides both the Guildhall Art Gallery and the London Metropolitan Archives.
• The City Corporation has three roles:
1) It supports London’s communities by working in partnership with neighbouring boroughs on economic regeneration, education and skills projects. In addition, the City of London Corporation’s charity, the City Bridge Trust, makes grants of more than £15 million annually to charitable projects across London; and it also supports education with three independent schools, three academic schools, a primary school and the world-renowned Guildhall School of Music & Drama;
2) It also helps look after key London heritage and green spaces including Tower Bridge, Museum of London, Barbican Centre, City Gardens, Hampstead Heath, Epping Forest, Burnham Beeches, and important ‘commons’ in south London;
3) It supports and promotes the ‘City’ as the world’s leading international financial and business centre, with outward and inward business delegations, high-profile civic events, research-driven policies all reflecting a long-term approach. See City of London for more details.