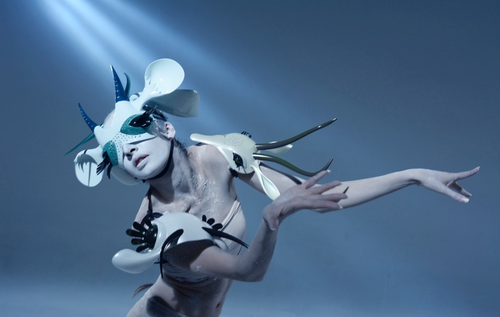 - SKY IN THEIR EYES: The Antelope in a Vanishing Landscape at the V&A -

Celebrate the contemporary art, design, sounds and states of China in flux.

We cordially invite you to join us for V&A Friday Late: Sino Flux on 24th Nov 2017 at 6.30pm for a 7pm start, for a performance of ‘Sky in their Eyes.’ Leading Chinese artist and designer Rui Xu will be presenting her new works with music and dance from around the world.

London, November 2017. The V&A has commissioned Chinese artist and designer Rui Xu to create a music and dance performance for the Friday Late Event, called ‘Sky In Their Eyes: The Antelope in a Vanishing Landscape.’

This work will be performed live for the very first time on the evening of 24th November 2017 at the Raphael Cartoons Gallery V&A as part of Sino Flux: A celebration of the contemporary art, design, sounds and states of China.

The performance will explore the proud and gentle antelope family, whose wild habitat is fast disappearing through urbanisation and slaughter by man. Rui Xu reinterprets the antelope family, endowing them with the traditional Chinese aesthetic character of ‘Junzi,’ which has a similar meaning to a gentle man. Their habitat was once vast, yet with the expansion of cities it is quickly disappearing. As well as the deterioration of their environment and lack of food, they also face slaughter from man.

Rui Xu’s unique costumes, animal masks and specially composed music and dance, will tell the story of hope and sadness through the eyes of these magnificent antelopes who have stood proudly as wardens of the land and existed harmoniously with nature for thousands of years.

The 11 dancers come from the UK and many other countries around the world, and together with Spanish musician Javier Murugarren and Rui Xu, they create this woeful but beautiful story.

Rui XU is a Chinese fashion designer and contemporary artist based in London whose works bridge fashion, painting, music and performance. She was Director of the fashion department at the China Central Academy of Fine Arts (CAFA) from 2012 to 2013, and furthered her fashion aesthetics research at the Royal College of Art in London 2014-2015. Her solo exhibition BEAUTY ON FIRE – FOR ZAHA at the Zaha Hadid Gallery (in memory of her friend and muse – the late, great Dame Zaha Hadid), and FROM XUAN TO BLINDNESS at the Royal College of Art and fashion experiment performance CHANT OF BREATH at the Saatchi Gallery, all received high acclaim in the UK. Xu’s professional experiences include: Chief Costume Designer for the 60th Miss World Final 2010; Chief Costume Designer for China Pavilion in Shanghai Expo in 2010; Costume Designer for The Dance Theatre – The Tea Spell from 2012 to 2017; and Bespoke Mask Designer for The Elephant Family Animal Ball 2016. Rui Xu’s designs are widely collected by leading institutions and individuals including The China Silk Museum, The V&A Museum, Clarence House and the late Dame Zaha Hadid, amongst others.