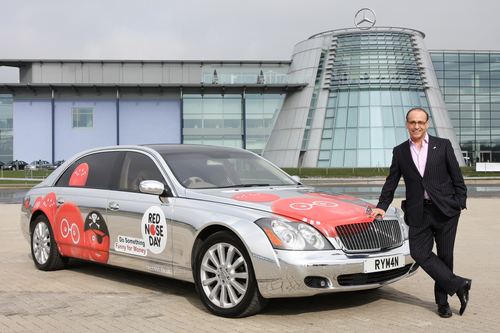 Straight-talking Dragon Theo Paphitis is going that extra mile to promote Red Nose Day on March 18 by turning his Maybach 62 into a Chromamobile to promote the charity.

Not only has the car been wrapped in chrome, it has been adorned with red noses and a picture of an exclusive Ryman Red Nose Day pen. The stationery firm is selling three types of pen for £1 each, with the full £1 going to Comic Relief. The company has sold over 280,000 pens to date.

The Red Nose Day chromamobile was officially unveiled at Mercedes-Benz World in Surrey. The transformation has been sponsored and carried out in association with Maybach and the Kent based Raccoon Group. The memorable number plate, RYM4N, remains.

Theo Paphitis said, “Red Nose Day is about fun and raising money for a fantastic cause and the car’s new design is certainly drawing attention! In fact, it is so shiny it is creating a bit of a sensation. It is unusual for such an exclusive luxury car to be ‘chromed’ in this way. I have been stunned by the number of Tweets I’ve had from people already and I am glad to say that it is all for a very good cause.

“I hope that people can see the funny side of our fundraising that is for serious reasons. I have visited Comic Relief funded projects in Ethiopia and seen street children benefit from Comic Relief cash. People shouldn’t forget that a significant proportion of the charity’s funds are spent on projects around the UK.”

Ryman employees have a terrific record in fundraising for charity. Last year staff from the company’s 237 stores and from its Crewe headquarters presented more than £225,000 to Sport Relief and in 2009 raised over £500,000 for Red Nose Day charities.

The production cost for the car’s wrap has kindly been funded by Maybach and Raccoon.

Mercedes-Benz World is open to visitors from 10.00AM to 6.00 PM, seven days a week. Admission is free.

Red Nose Day 2011 is heading your way on Friday 18th March when the great British public will once again be asked to Do Something Funny for Money.

To join in the fun go to www.rednoseday.com and find out how you can get involved.

By raising cash this Red Nose Day, you are helping to change lives forever. That’s because Comic Relief spends all the money raised by the public to give extremely vulnerable and disadvantaged people in the UK and Africa a helping hand to turn their lives around.

Comic Relief was launched on Christmas Day in 1985, live on BBC One. At that time, a devastating famine was crippling Ethiopia and something had to be done. That something was Comic Relief. The idea was simple – Comic Relief would make the public laugh while they raised money to help people in desperate need. Before too long, Red Nose Day was created and the first ever event in 1988 raised a staggering £15m. To date, twelve Red Nose Days have raised more than £500m. That money has helped, and is helping, to support people and communities in dire need both in the UK and Africa.

Ryman is the UK’s favourite specialist stationery retailer with 236 stores throughout England, Scotland and Wales and a website at www.ryman.co.uk.