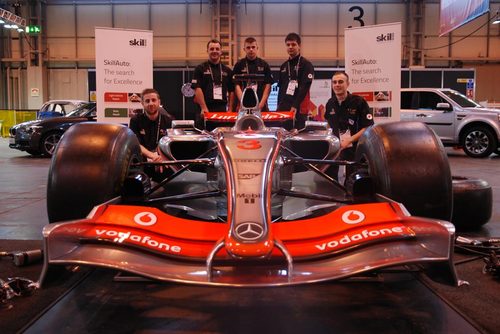 McLaren Group is proud to support an initiative that raises the profile of skills and vocational training within the automotive sector.

The McLaren Group has shown its support for the UK’s next generation of top automotive technicians by inviting the winners of the 2012 Skillauto competition to the McLaren Technology Centre for an exclusive tour. The competition - organised by the Institute of the Motor Industry (IMI) and open to applicants with no more than three years experience - seeks to find the best technicians within the fields of automotive technology, automotive body repair and automotive painting.

The final of the competition took place this weekend at the UK’s biggest skills event, The Skills Show at the Birmingham NEC, with the top 18 entrants from across the nation competing to become champions in their field of expertise. Finalists were selected from 103 regional heats, and were required to demonstrate their abilities in front of a live audience, before one winner from each discipline was announced.

The Skillauto final also played host to a McLaren pitstop challenge, which demonstrated the importance of automotive excellence to the audience of young specialists. The Vodafone McLaren Mercedes Formula 1 team (http://www.mclaren.com/formula1) holds the record for the world’s fastest pitstop, and this winning mentality inspired the next generation of automotive leaders as they took to the stage for the Skillauto final.

“McLaren Group is proud to support an initiative that raises the profile of skills and vocational training within the automotive sector. With a greater emphasis now being placed on rebalancing the economy and rebuilding the UK’s manufacturing sector, an enormous premium is being placed on highly-skilled engineers and technicians.

“Skillauto searches for, and rewards, excellence – a value that the McLaren Group is based on. It is therefore fitting that we should welcome the young winners of this competition to the world-renowned McLaren Technology Centre, to inspire them to hone their skills and pursue perfection in everything they do.”

“The Skills Show provides an ideal showcase for the young talent within our industry, and the standard in this year’s heats was very high, promising us an exciting final competition.

“The Skillauto competition is supported by many of the top companies in our sector and I’m delighted that McLaren was involved, not only in providing the ultimate prize for our three champions but in the pitstop challenge activity which produced a real buzz around our stand.

“As a Formula 1 multi world championship winning team, they know what it takes to reach that top spot on the podium, representing absolute excellence, and our young competitors emulated this achievement at this weekend’s competition.”

The McLaren Group is an organisation with one goal: to win. It is perhaps best known for its successful and iconic Vodafone McLaren Mercedes Formula 1 cars, but it is more than just a racing team. Guided by the vision of executive chairman Ron Dennis, one of the UK’s most dynamic entrepreneurs, the McLaren Group (http://www.mclaren.com/) encompasses an exciting range of ultra-high-technology businesses including McLaren Applied Technologies, McLaren Electronic Systems, Absolute Taste and McLaren Marketing.

About the Institute of the Motor Industry:

The IMI is the home for members and professionally registered individuals working in the motor industry. It is the industry’s Government licensed Sector Skills Council (SSC) the governing body of the ATA and AMA accreditation schemes and is the authoritative source of information, standards, qualifications and apprenticeships for the retail motor industry.

We help your business stand out from the crowd! We provide ethical SEO, PPC advertising and online PR services.