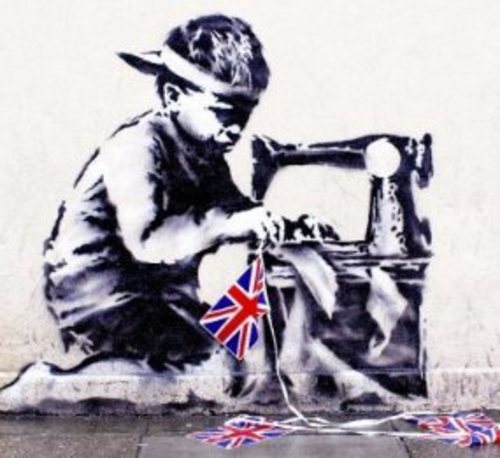 The Sincura Group, the London based concierge specialists who pride themselves on obtaining the unobtainable, have once again pulled off a major coup by bringing this piece back to the capital to feature as the centrepiece of their next show, Banksy at the Flower Cellars.

Slave Labour, which depicts a young boy hunched over a sewing machine making Union Jack bunting, first appeared just prior to the Diamond Jubilee celebrations of 2012, on the wall of a Poundland store in North London's Wood Green.

In February of this year the mural and the wall it featured on mysteriously disappeared resulting in a media frenzy and wild speculation as to its whereabouts, within just two days it surfaced at a Miami auction house making headlines worldwide.

Having now been sensitively restored under a cloak of secrecy, the piece will be returning to London for one night only to be shown at the London Film Museum in London's Covent Garden on June 2nd.

Alongside will be showing other exclusive works from Banksy, Damien Hirst, Andy Warhol, Mario Testino and Russell Young along with a number of emerging young artists (possibly the Banksy's of the future).

Having taken months to put together and featuring works from some of the world’s leading private collections, many having never been seen in public before, let alone made available for purchase.

Celebrities, collectors and Sincura’s VIP clients are due to attend in force to see, and perhaps own, some of the most important artworks of the modern era.
Doors open at 6pm with complimentary champagne from sponsors Veuve Clicquot and canapés created by LMG under the guidance of ex-head of celebrity restaurant Zuma.

Note to editor: Neither The Sincura Group, or any of our event partners, where involved directly or indirectly with the original removal of the Slave Labour piece.


- Andy Warhol was an American artist who was a leading figure in the visual art movement known as pop art. His works explore the relationship between artistic expression, celebrity culture and advertisement that flourished by the 1960.

- Damien Hirst is an English artist, entrepreneur and art collector. He is the most prominent member of the group known as the Young British Artists, who dominated the art scene in Britain during the 1990s.

- Mario Testino is a Peruvian fashion photographer. His work has been featured in magazines such as Vogue and Vanity Fair. His career highpoint came when he was chosen by Princess Diana for her Vanity Fair photoshoot in 1997.

The Sincura Group started as a secret organisation open buildings and access through their unique networks. The company is now regarded as the market leaders in VIP concierge, lifestyle, tickets and events through their London office and internationally. Now representing 4,000 high net worth clients, they are modeled on three basic principles - being the best connected network in the world, offering the best possible service to clients, and being the best priced service on the market.

Formerly the Flower Cellars, The London Film Museum Covent Garden opened its doors in April2012 and works closely with the London Film Museum South Bank, which was established in 2008. It is the only Museum dedicated to Film in the United Kingdom and prides itself on being the premier platform to showcase the industry and the artists within it. LFM Covent Garden has also quickly earned the reputation of placethe place for high-profile product launches and exhibitions alike.