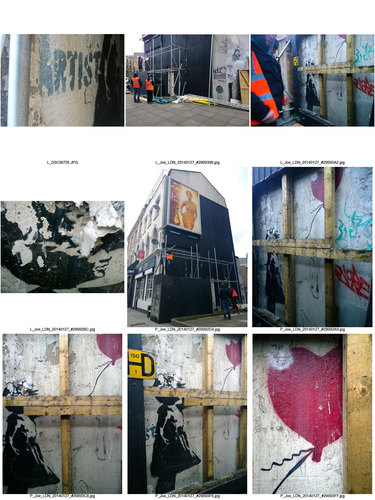 Another Banksy artwork is currently being removed from the streets of London. As the rat is his signature stencil, the Girl with the Red Balloon is the most popular piece from this renowned street artist and depicts an innocent girl reaching for a red heart-shaped balloon that is just beyond her grasp.

Banksy chose two locations for this famous creation – one on the stairwell of the South Bank and the other on Great Eastern Street on the borders of Liverpool Street Station. However, almost a decade ago, the later was covered with advertising billboards and doomed to fate of unceremonious decay and erosion.

Thousands of Londoners walk past the piece each day on their morning commute to work completely oblivious of its existence as it fades from the public knowledge. That is until The Sincura Group, the concierge company behind the recovery of Banksy’s infamous ‘Salve Labour’, where commission to salvage and restore the piece. The work started a week ago and is due for completion this Sunday, February 9th.

Tony Baxter, director of The Sincura Group, commented “this piece was one of our toughest assignments to date, with the paint literally falling off the building after years of erosion. The restoration team have taken the unprecedented steps of starting their delicate work on-site – spending days placing special film over the artwork to protect it from further damage during the salvage”.

With specialist equipment shipped in from America to assist the £40,000 removal project, the piece will then travel to The Sincura Group’s secret hideout where it will be painstakingly restored to its former glory by the world’s leading experts. The piece is due to be revealed in April 2014 when the Sincura Group hold their 2014 Banksy event.
The Girl with The Red Balloon will be one of 7 Banksy street artworks on display – alongside ‘No Ball Games’ which is due to complete it’s 9 month restoration within the next few days. The show – called STEALING BANKSY? – explores the social, legal and moral issues surrounding the sale of street art.

Taking place in April in the heart of London, the exhibition showcases the most expensive collection of Banksy artworks ever assembled under one roof and is the culmination of a 12 month project to uncover, salvage and lovingly restore these pieces that have shaped the capital we live in. Culminating in an auction with proceeds supporting local charities, it will be the first and only time these pieces will ever be displayed in public. Visit www.stealingbanksy.com for more information and to attend.