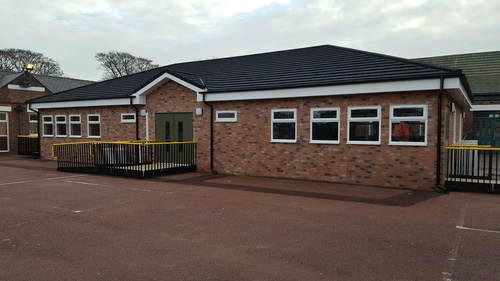 St Helens February 6th 2017, Springfield Mobile has just completed a £300 000 project for St Helens Council at Broad Oak Community Primary School.
The new classrooms for years five and six were needed as the school’s intake has considerably increased over recent years and the expansion gives the school’s students a better environment to prepare for their SATS tests in year 6.

Alan Cartwright, service manager assets and buildings for St Helens Council, comments, “There were three main criteria we had for the tender – cost, minimising disruption to the school and a building that was future proofed and capable of being easily extended. Not only was Springfield the most competitive supplier who tendered, with the brick finish and sloping roof on the new classrooms it blends in perfectly with the existing site and in the words of staff there, they’ve given us the best classrooms in the school.”

Springfield mobile’s managing director Lyndsey Duggan adds, “I think now across the educational sector it’s very hard to justify dedicated building on-site given we completed this inside 13 weeks from site preparation to handing over the keys. Off site modular construction makes much more sense and it is great to be involved in projects where we get such good feedback and can provide something which adds so much value to our local community.”

The double classroom extension and toilet block has been designed to allow further expansion at a later date and kept the school safe during the build cycle, connecting utilities and services right through to compliance with energy and safety standards such as providing child friendly door hinges and windows.
Alan Cartwright concludes, “We’ve nothing but good to say about Springfield Mobile, this was a major step up from earlier contracts providing portable offices and changing rooms and their response was terrific.”

Springfield Mobile is a privately owned company employing 35 staff from its site in Sutton, St Helens, with over 40 years experience in designing, manufacturing and supplying portable buildings. It was founded by Ken and Carole Britner whose daughter Lyndsey has overseen growth of the company by some 140% over the past five years reaching a turnover of £5.8 Million in 2016. All of its modular portable buildings are manufactured on the company’s 40 000 sq ft premises. Most recently the company won the ‘Best Portable Building Firm - UK’ in the 2016 sustainable building awards from the prestigious Build construction magazine.