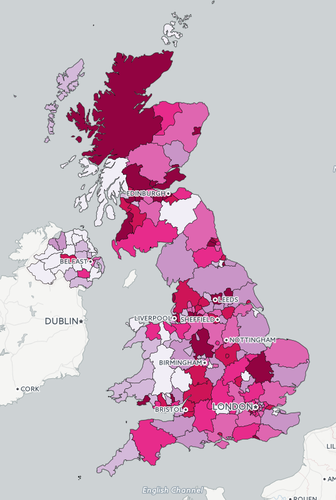 When broken down into cities, 13 of the top 20 most forgetful cities are based in the north with Blackpool topping the charts

New research has revealed that Northerners are most likely to forget to buy their loved one a gift this Valentine’s Day, in a study conducted by insurance specialist Staveley Head.

The research reviewed five years of historical data and over 200,000 tweets using Brandwatch data from all over the UK. When broken down into cities, 13 of the top 20 most forgetful cities are based in the north with Blackpool topping the charts, closely followed by Manchester and Dundee.

Whilst some southern cities such as London, Southampton and Brighton and Hove have a high forgetful rating, when the UK is grouped by region, the north as a whole comes out on top with the highest level of forgetfulness.

Ashley Peters, Managing Director at Staveley Head, comments “We were surprised to discover such a variation in results. As a provider of courier insurance, we know how simple it can be to arrange delivery in advance of this special day and encourage everyone to plan ahead to avoid any unnecessary heartache.”

The full and interactive version of the map can be found on Staveley Head's blog.

About Staveley Head
Established in 1991, Staveley Head has grown to become one of the most respected providers of specialist insurance products and today employs over 90 people, principally in North Wales. Staveley Head Limited is authorised and regulated by the Financial Conduct Authority.

Staveley Head is one of the most respected providers of insurance products to businesses and individuals in the UK.