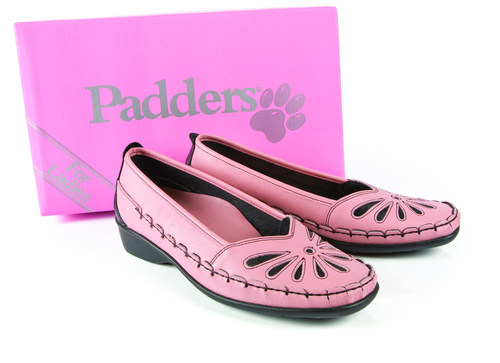 For the fourth consecutive season a leading shoe brand Padders is producing a limited edition version of one of its popular ranges and donating £10 from every pair sold to support one of its favoured charities, Breast Cancer Care. The Destiny shoe, available in two colours, pink, and black with pink is in the shops now in time for Breast Cancer Awareness month in October.

Padders is renowned for its award-winning feelgoodfeet™ footwear, designed for comfort and support. In producing yet another limited edition version of one of its best selling shoes it is enabling its female customers to not only feel good about their feet but also about supporting a vital cause. According to Breast Cancer Care, someone in the UK is diagnosed every 11 minutes with breast cancer, so support for affected people is essential.

Only recently Padders handed over a cheque to Breast Cancer care for £8,230, the sum raised from sales of its limited edition pink Pace shoe from last season. “Next month a lot of people nationwide will be getting behind the breast cancer awareness campaign, culminating in the ‘In the pink’ day on October 26. We’d like to think that a great deal of our customers will be tempted to sport new pink Destiny shoes on that day while feeling that they’re helping someone affected by breast cancer,” Mike Rowe, Sales Director - Padders.

Padders’ Destiny shoe is available from a network of authorised shoe retailers across the country or can alternatively be ordered by phoning 01536 534977 or logging online at www.padders.co.uk. It is available in an ‘E’ fitting, from size 3-8 (including half sizes) and costs £58, £10 of which will be donated to Breast Cancer Care.

The Padders brand was launched in 1982 by family-owned business T Grocock & Co in Rothwell, Northants. The family opened its factory in 1914 and during the war years made army boots and mens’ utility footwear. In the 1960s it produced winkle-pickers and in the 70s it met the fashionistas’ craving for platforms. In the 1980s it created Padders and the feelgoodfeet™ concept and by the end of that decade demand was so high it was producing more than a million pairs a year. Today Padders is a favoured choice of wide-fitting comfort footwear for men and women.

More information can be found at www.padders.co.uk