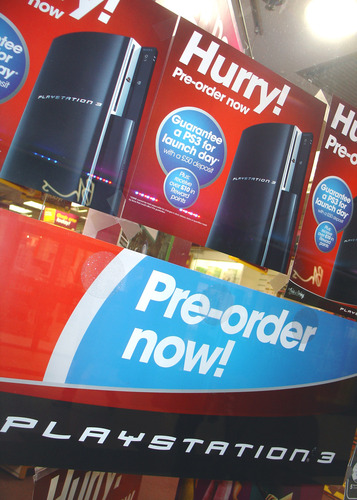 Have you pre-ordered your PlayStation 3 yet? If you have sust-it recommends you top-up the pre-payments on your electricity account at the same time. The US version of the PS3 comes with a whopping 380 Watt power supply. That’s over twice as much as its main competitor the Xbox 360 with its 165W unit, and over seven times more power hungry than the PlayStation 2. If you were to combine a PS3 with a LG 71” HD Ready Plasma TV to take full advantage of the amazing graphics you could be burning 1.4kWh (kilowatts) of power per hour and if you’re a serious gamer that could cost you £1.19 for a five hour session.

Ross Lammas from the ‘energy consumption compression website’ sust-it.net said: “We expect new car launches to announce more performance with less fuel consumption; it’s a pity that this does not apply to electronic goods. Is it not time for an energy efficiency rating system for consumer electrical goods?”

sust-it believes that consumers are becoming increasingly aware of the need to reduce energy consumption, and therefore reduce their own CO2 emissions. The PS3 again highlights the need for clear labelling of the potential power consumption of electronic devices, rather than relying on small print in the technical specification sheets.

The sust-it website allows consumers to compare the running cost of hundreds of consumer electrical goods. It does this by taking the manufacturers published energy consumption rates then multiplying this by an average electricity unit tariff, so making it possible to see how much it will cost to run each day. If individuals and organisations choose energy efficient products in their homes and workplaces they can have a real impact on long-term CO2 emissions and save money. Simply using the growing database on sust-it.net to view the potential “per day” or “per year running” costs of electrical and white goods, consumers can make informed buying decisions, which will have less impact on the environment.

The electricity unit rates used to calculate the costs per hour/cycle/year are based on the following:

C02 Calculations can be made at National Energy Foundation web site http://www.nef.org.uk/energyadvice/co2calculator.htm

The sust-it website has been conceived and developed by TurnRound Multimedia an independent production company, after it’s proprietor Ross Lammas (45), became increasingly frustrated by the difficulty in finding the data on the energy consumption of products, whilst he was building an environmentally sustainable office and home in Gloucestershire.

The 1st website in the UK to rank products by their energy efficiency and CO2 emissions. The 'go-to' website to find the most energy efficient products, from fridges to cars!