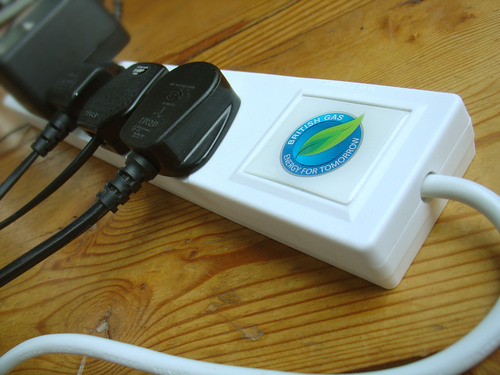 There seems to be an urban myth surrounding how much electricity your TVs and Hi-Fi’s consume in standby. The latest Flat-screen TVs, DVD players consume less power in standby (0.6w or costing 63p per year to run) than some of the Standby Savers themselves (1w or £1.05 per year to run). Infact, the most energy hungry equipment under your television are the Satellite / Digital Set-Top Box and DVD/VHS hard disc recorders, which you’re not meant to switch off anyway – as they update programme schedules and software in the wee hours, or have clocks.

1/ When replacing Electricals or Appliances buy the most energy efficient ones you can afford and make huge savings long-term!

3/ As your bulbs blow – replace with energy savers.

4/ Put your Satellite / Digital Set-Top and videos on a separate extension
socket from your other equipment, and switch off the rest at night – preferably at the plug.

5/ Shutdown your PC when not in use and switch off at the wall, as some computers and peripherals still draw power even when off!

By using sust-it’s energy consumption website that ranks electricals by their energy efficiency, you can spot those appliances that contribute to your inflated electricity bills and CO2 emissions.

The sust-it site is constantly updated and contains a wide range of products from TVs to chest freezers. You can even switch between electricity tariffs so you can see what other energy providers have in-store and calculate your CO2 emissions at the same time.

The sust-it website has been conceived and developed by turnround_new_media, after it’s proprietor Ross Lammas, became increasingly frustrated by the difficulty in finding the data on the energy consumption of electrical products, whilst he was building an environmentally sustainable home and office.

Ross said: “There’s a staggering difference between the best performing electricals in the marketplace. For example tumble dryers – one of the most energy hungry appliances in your home – could be using 230% more electricity than the best available. Even your 32” flat-screen TV television could be using 150% more power than a different model. There are big savings to be made and they’re easy to spot on our website! I hope that the sust-it.net website helps us all to save energy and offers manufacturers and retailers a great opportunity to showcase their most energy efficient products”

Electricity Units
The electricity unit rates used to calculate the costs per hour/cycle/year are based on the following:

ecotricity - New Energy Tariff of 15.95 pence per unit for the first 728 units and 14.8 pence per unit thereafter. PLEASE NOTE: You can select different electricity tariffs on the sust-it site.

The sust-it website has been conceived and developed by turnround new media an independent production company, after it’s proprietor Ross Lammas (47), became increasingly frustrated by the difficulty in finding the data on the energy consumption of products, whilst he was building an environmentally sustainable office and home in Gloucestershire.

The 1st website in the UK to rank products by their energy efficiency and CO2 emissions. The 'go-to' website to find the most energy efficient products, from fridges to cars!