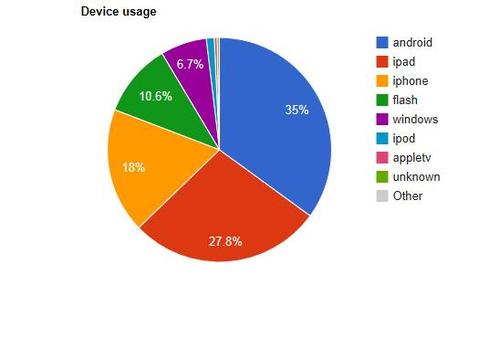 Alex Guest, TVCatchup marketing director, said: “Major sporting events attract huge audiences for TVCatchup and our mobile apps are especially attractive to our users, many of whom tell us they don’t own standard TV sets and rely on TVCatchup for TV viewing. All in all, this gives broadcasters additional reach, while viewers benefit from our service.”

Bruce Pilley, chairman added: “TVCatchup streams ITV under the terms of the Copyright Designs and Patents Act. We are seeking ways to enable ITV to generate additional revenue from TVCatchup’s substantial viewing figures.”

Pie chart showing mobile device usage via WiFi, including tablets, smartphones etc.
#
TVCatchup was conceived in 2007 and was deemed to be a qualifying cable service in a landmark ruling in the London High Court in 2013. This UK based service now has nearly 10m active users enjoying free-to-air television across the web and a wide range of mobile, tablet and other connected devices.