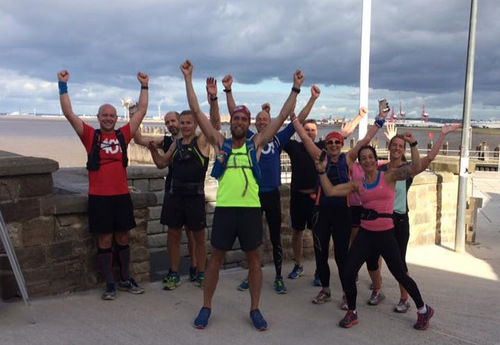 Ben Smith reaches the end of his 10,506.2 running journey, the equivalent distance to 401 marathons in 401 days, in Bristol on the 5th October 2016. Since the 1st September 2015, Ben has run in 309 locations across the UK in an aim to raise £250,000 for Kidscape and Stonewall. The virtual challenge, #Marathon401, allows people from all over the world to join him in running against bullying. Tickets costing £26.20 for #Marathon401 are available from The 401 Challenge and EtchRock and 100% of the ticket price goes to the charitable fund.

The 401 Challenge have teamed up with EtchRock and Virgin Money Giving to deliver a virtual running challenge named #Marathon401. Participants can join Ben virtually for #Marathon401 by running either a 10k, half marathon or marathon between the 2nd and 9th October 2016. EtchRock’s platform enables individuals to record their training, connect with other participants and actively promote the challenge worldwide. #Marathon401 enables people to support The 401 Challenge’s objectives to raise £250,000 for charity and engage as many people as possible. £140,000 has been raised so far.

#Marathon 401 is open to people of all running abilities as participants can chose their distance, location and pace. Individuals can complete their virtual #Marathon401 by running parts of it on different days over the eight days, even including official races or park runs to make the distance they have chosen.

Stuart King Cofounder of EtchRock UK says “EtchRock are extremely proud to be supporting Ben Smith & the Final 401 Marathon with what is set to be one of the UK's biggest virtual challenges yet! With the release of our new ticketing feature for virtual challenges, we hope to help raise as much as possible for Ben's great cause!”

Over the course of the challenge Ben has ran with more than 8000 people, from experienced runners to beginners. The youngest runners have been children as young as five years old, the oldest 80. Running with Ben has brought together running clubs, schools, members of the services community including the army, RAF, police and fire and rescue, businesses and parent groups. The 401 Challenge has created a 401 community with over 36,000 likes on its Facebook page. The ambitious team behind The 401 Challenge hopes to unite and inspire anyone who has been touched by Ben’s incredible story of overcoming bullying, to get involved and make history with him.

Jo Barnett, Executive Director at Virgin Money Giving explains “Virgin Money is delighted to have supported Ben throughout his epic 401 Marathon Challenge. We’ve worked closely with EtchRock who have used our APIs to allow people to run a virtual marathon alongside Ben and donate to his cause. He aims to smash his fundraising target of £250,000 and I’m sure he will receive many more donations to his Virgin Money Giving page as awareness grows for his truly impressive challenge.”

Participants will receive a limited edition 401 challenge medal and a letter from Ben once they have completed their virtual run.

Ben has inspired thousands of young people by delivering motivational talks in more than 90 educational institutions across the country. Ben and The 401 Challenge team have been commended for the their charity work by the likes of former Prime Minister David Cameron, Stephen Fry, Dame Kelly Holmes and Stonewall founder and former MEP Lord Baron Cashman.

On the 1st September 2015, 34 year old Ben Smith set off on an incredible journey to run 10,506.2 miles all over the United Kingdom - which is the equivalent of 401 marathons in 401 days. When Ben was at school he was bullied so badly that he attempted to commit suicide twice. For many years after leaving school he suffered from depression, despite having a successful corporate career. At the very young age of 29 Ben suffered from a TIA (mini-stroke) which caused him to make drastic changes to his life. As part of his recovery Ben joined a running club and discovered a way to re-build his confidence and self esteem. Ben transformed his life and developed the idea of 'The 401 Challenge' to mark this change. The challenge has four key objectives in addition to running 10,506.2 miles. These are to raise £250,000 for charities Kidscape and Stonewall, to get as many people involved as possible, to encourage others to take on their own personal challenges and to raise awareness to the harmful effects of bullying.