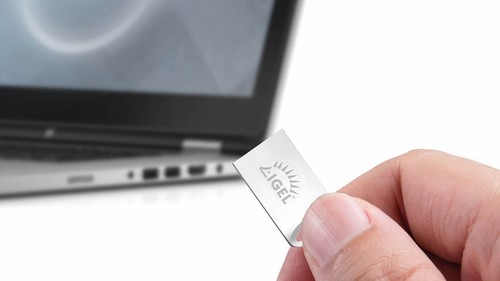 For the first time, IT organisations can now convert most 64-bit, x86-based Apple Mac computers into an IGEL OS-powered endpoint via the micro thin client solution

Reading, UK. Aug. 30, 2017 – IGEL, a world leader in endpoint management software for the secure enterprise, today announced that it is extending the capabilities of the IGEL UD Pocket™, and for the first time providing IT organisations with a smart, simple and secure way to leverage the IGEL OS on their users’ Apple® Mac computers.

First introduced in December 2016, the IGEL UD Pocket is a flexible and cost-effective out-of-the-box micro thin client solution designed to improve the security of bring-your-own-device (BYOD) initiatives in organisations with remote or mobile workforces.

“With an increasing number of businesses and their workers opting to use Apple Macs due to their ease of use, flexibility and security, the IGEL UD Pocket with Mac support is a game changer for IGEL,” said Ainsley Brooks, IGEL’s UK & Ireland country manager. “Up until now, the only way that enterprises have been able to access the IGEL OS has been through their x86 Windows-based devices. The certification of the Apple Mac platform by IGEL was driven by customer demand to support their creative staff, contractors and executives who prefer this platform. By providing support for Mac computers through the IGEL UD Pocket, not only are we extending our addressable market opportunity, we are also helping our enterprise customers simplify the management of their endpoints by making it possible to securely administer x86-based PCs, thin clients, laptops and Mac-based endpoints via one central management console.”

Ease of Management Lowers TCO for Businesses Leveraging IGEL on the Mac
Similar to all other IGEL OS-powered software-defined thin and zero clients, the IGEL UD Pocket is integrated into the IGEL Universal Management Suite™ (UMS), a centralised and secure remote management console that provides organisations with complete control over their IGEL endpoints, saving time and resources.

The combination of the IGEL UD Pocket for Mac and the IGEL UMS, can also reduce operating expenses due to the already lower total cost of ownership available through the Mac platform. For example, it was recently reported that when IBM began integrating the Apple Mac platform, it found within the first few months that only 5 percent of Mac equipped employees called their internal help desk for assistance, versus 40% of PC users.

Supporting enterprise-level security standards and protocols, the IGEL UD Pocket features two-factor authentication through external smart card readers or USB tokens, which prevents passwords from being lost, forgotten or intercepted by cybercriminals. “Two-factor authentication is especially important in vertical markets such as financial services and insurance, education and healthcare where workers may be roaming between multiple desks, offices or locations over the course of their workday,” continued Brooks.

Additionally, through the IGEL Cloud Gateway (ICG), which seamlessly authenticates the connection between the IGEL UD Pocket and IGEL UMS, IT organisations can provide end users with secure, anytime and anywhere access to their Citrix, VMware and Microsoft virtual desktops via a standard Internet connection, without the need for a virtual private network (VPN) or leased-line solution.

With IGEL UD Pocket, IT organisations can convert most Apple Mac computers into an IGEL OS-powered endpoint, as long as they meet the minimum requirements of having a 64-bit, x86-based CPU, 2GB of RAM, 2GB of storage and UEFI boot capability. Key features available through the Apple Mac computers, and supported by the IGEL UD Pocket include Mac Keyboard, Mac Touchpad, most Wi-Fi, Magic Mouse and Magic Keyboard.

The IGEL UD Pocket can be purchased through IGEL channel partners in the UK for £89+vat. Licensing for the IGEL UD Pocket is assigned to the USB stick, independent of the MAC address of the target endpoint. This flexibility to roam from one device to another, along with regular IGEL firmware updates, offers IT organisations a simple solution for managing a diverse range of 64-bit x86 devices and Macs.