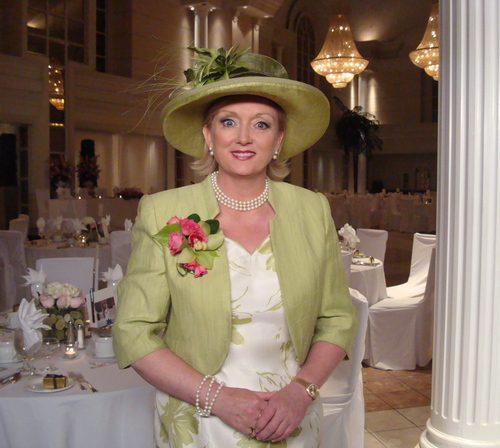 A UK wedding planner who plays fairy godmother to couples hoping for their dream wedding in a hit Canadian reality TV show is all set for a fifth series, premiering in April.

With her trusty sidekick Oscar a six-year-old shih-tzu, Jane Dayus-Hinch, from Lichfield, Staffordshire has helped 65 couples over the last four years in her show Wedding SOS.

Jane’s straight-talking approach combined with her ‘true Brit’ impeccable elegance has proved popular with viewers in Canada and the US, where Wedding SOS, made by Slice TV, is aired several times a day.

In the UK, Wedding SOS airs on Sky Real Lives and Sky Three. Jane’s expertise has helped couples to tie the knot in New York and all over Ontario, but she knows that each and every bride, the wedding has to be extra special.

Memorable Wedding SOS episodes have included Jane having to find a suit of armour after a bride to be announced she really did want her “knight” to be wearing the right attire, reuniting an estranged daughter with her father and even accompanied a groom and his bridal party to a firing range, where Jane’s own sharp shooting skills won the day.

And while her British accent and stylish outfits have made her a household name and won her an army of US and Canadian and many Polish fans, she also relishes her work when it involves another passion – riding her beloved Harley Davidson motorbike. Jane has ridden for many years and is also sponsored in the show which sees her riding a variety of fabulous bikes.


Now she finds herself as one of a growing band of Brits making it and dominating TV across the Pond. A wedding planner for more than 25 years, Jane’s experience means she is one of the UK’s foremost wedding experts having worked with various celebrities – even though she is sworn to secrecy as to who her most high-profile clients have been.

Jane says: “The series has taken over my life, I can’t walk down the street in Toronto or New York without people stopping me. We film up to 70 hours for each show – but you only see 30 minutes.

Jane says: “The series has taken over my life, I can’t walk down the street in Toronto or New York without people stopping me for a photo or autograph. We do film up to 70 hours for each show – but you only see 30 minutes of drama”.

“Back home I’m also approached for advice from desperate brides, their mothers and sometimes even grooms , but thankfully it’s on nowhere near as large a scale.

“I never imagined that I would become a TV star across the Pond, but it is very flattering. The Production company got in touch with me after they saw me in a press interview. I was also an Ambassador for my home city of Lichfield at the time.

A pilot episode of Wedding SOS was filmed in France – and the couple turned out to be already married.

Jane adds: “We certainly started as we meant to go on – nothing is straightforward!

“But this is what I do. I’m so proud that the show has reached its fifth series, in today’s cut throat TV world it can be an achievement to get past the first series let alone four!”

Jane has also clinched an impressive range of sponsorship deals with Jaguar and Jacques Vert among them.

Jane can offer tips and advice for features and reports on any aspects of wedding planning, from how to make the most of a wedding on a budget to how to plan the ultimate luxurious day. She was once even asked to help make the bride’s dog a ring bearer – and managed it!

If you are working on a wedding-related feature and would like to feature Jane’s tips and advice, please don’t hesitate to get in touch!

• For more details, or to get in touch with Jane, please call Linda Jones or Carol Garrington, Passionate Media, 01543 468621.
• You can also see Wedding SOS episodes on YouTube.
Follow Jane on Twitter http://twitter.com/WeddingSOS
• Jane’s website is at http://www.janedayus-hinch.com/