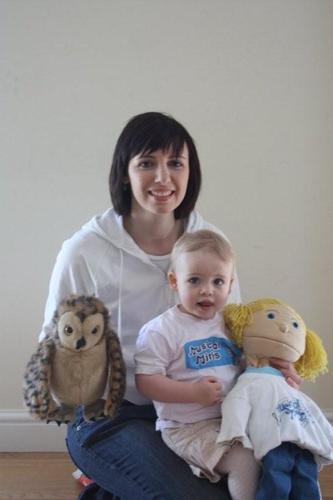 A mum who quit the rat race to set up her own business running fun music groups for babies and pre-school children is celebrating after winning a national business award.

Amanda Perkins, 28, from Milton Keynes, scooped the Young Woman Franchisee of the Year award, part of the Encouraging Women into Franchising Awards.

The mum-of-one was given the award for her success in running the Buckinghamshire and South Northants franchise of Musical Minis, (www.musicalminis.co.uk) which provides the music groups.

The judges of the awards, held at at the offices of NatWest in Bishopsgate in London, commended the mum-of-one for her remarkable business abilities running the franchise.

Musical Minis groups offer a range of fun but structured classes for babies and toddlers using a combination of music and stories to aid the development of co-ordination, speech and social skills. Sessions can be provided in private classes, sure start children’s centres or part of nursery groups and parties.

Since taking over the franchise in April 2010 Mrs Perkins has turned round the business. She’s attained record breaking performance figures for any Musical Minis franchise in the area, increasing the number of classes by more than five-fold, from two to 13 across the Buckinghamshire and South Northants area.

She was also praised by the judges for her ingenious ways of finding alternative sources of funding, following government cuts in sure start children centres, to enable children to attend subsidised classes.

Mrs Perkins, who has a one-year-old daughter Niamh with husband Toby, decided to give up her job as an HR adviser and buy the franchise after starting a family.

“I’m really, really pleased with the award, loads of people have been getting in touch to pass on their congratulations, there’s been a great reaction,” she said.

“I love my job at Musical Minis, I meet some amazing children and I love making them smile, it doesn’t feel like work it’s just having some fun with the children.

“But as a business you can push the franchise as much as you want to and I’ve tried to make it the most successful business I can whilst being a good mum.

“I left my office job as I found it stressful and I didn’t want that with a baby to think about. Running a franchise for Musical Minis has been a great change for me, giving me a great work-life balance, I can even bring my daughter along to the classes - I can’t really imagine doing anything else ever.”

Joint managing director of Musical Minis Karen Sherr said: “It’s great that Amanda has been recognised in this national business award scheme for all the hard work she’s put in to the Musical Minis franchise.

“This just shows that a Musical Minis franchise can offer an ideal solution, a highly-rated business which can fit in with family life, in a job helping to give children the best start in life through fun play.”