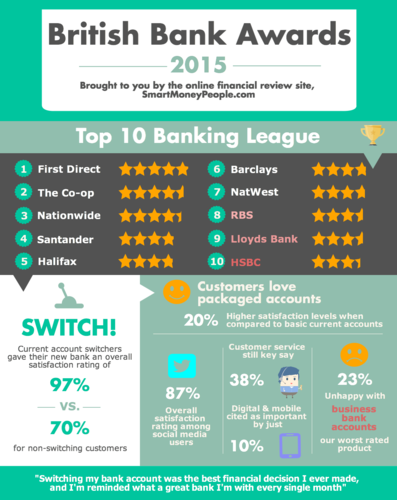 HSBC bombed in the Awards, taking bottom place in the overall league scoring just 3.2 out of 5. In fact, HSBC placed bottom of almost all categories, with one notable exception being ‘Best Business Banking Provider’ where they were placed as runner-up.

Despite traditional apathy within the market, it seems the Government’s switching scheme may be working with exceptional satisfaction ratings of 97% among switchers. In comparison, non-switchers had 70% satisfaction ratings, and across all products, 64% of all respondents felt fairly treated.

With the ‘big four’ banks controlling 85% of all UK business current accounts, the Awards also demonstrated that 23% of those polled were unhappy with their business accounts. This was the poorest rated product.

Customers cited that although it is essential, online security can be ‘tedious’ and many like social media with those customers using Twitter showing overall satisfaction levels of 87%.

Mike Fotis founder of Smart Money People said: “We launched the British Bank Awards because we wanted to gather some valuable insight into how people feel about their banks and what the drivers are for making them choose one financial institution or product over the other – the results have been a real eye-opener.

“The near clean sweep by First Direct hints at the declining role of branches, but proves that exceptional customer service is still really valued, and remains a strong differentiator. Most interestingly, the anecdotal information from reviewers paints a very different picture to what we were anticipating; namely packaged account satisfaction is high, business accounts are unloved and switching banks has never been easier or more beneficial!

“We know that today’s consumer is savvier than ever before but the Award results really demonstrate how far our banking habits have evolved. As a nation we are much more confident banking online and via the telephone and we’re not prepared to put up with the failings of the larger more-established banks when there are so many serious alternatives available.”

The average overall rating across the banking industry was 3.7/5 with only three banks achieving an overall rating higher than 4. First Direct, however, achieved an exceptional 4.9 whilst HSBC came out at the bottom of the league table with only 3.2/5.

One lucky reviewer, Sarah Hendriks won the British Bank Awards’ prize for best review, receiving GBP200 for her opinion on First Direct. Sarah switched originally to take advantage of a GBP125 incentive. She posted: “Although they don’t have the face-to-face availability of some banks, their phone service is superb, not to mention their products.

“You get to speak to a real person who is knowledgeable about what they have and how it works for you and, wait for it… helpful!”

Smart Money People launched in October 2014 and is attracting a growing number of supporters who are championing the site as ‘Trip Advisor for financial services’.

Mike concluded: “We hope to make the British Bank Awards an annual barometer that people can refer to and make informed decisions on which financial products and institutions they choose to use. It may also prove a valuable resource for those banks that haven’t performed as well as they should have!”

Issued on behalf of SmartMoneyPeople.com by The Tonic Communications. For more information contact georgina@thetoniccomms.co.uk or call 07557 055723.

The UK’s first awards voted by the British public to find the nation’s best bank and financial products, was launched in December 2014 by online review site Smart Money People.

Summary
• First Direct are clear leaders of the pack, sweeping up 5 / 7 awards

• Customers that have switched accounts are really happy with their new accounts, (providing an overall rating of 97%) suggesting that more customers should consider switching accounts
• Although there has been some early scrutiny of packaged current accounts, our customer reviews show overall satisfaction levels of these accounts to be 20% higher when compared to non-package accounts). This may begin to change as the media focus more on whether these accounts offer value for money

Our results are based on 514 reviews.

Our Top 10 League is included as part of the attached infographic.

The average overall rating across the banking industry is 3.7/5. Only 3 banks achieved an overall rating higher than 4, with First Direct achieving an exceptional 4.9. HSBC came bottom of our league table.

One Barclays customer, Kiki’s and Mimi’s said, “My Business Manager at my branch was brilliant, he showed interest in my business & myself. My business manager also arranged a pop up shop for me at my local branch which
gave my business the boost & publicity it needed.”

One First Direct customer, Sarah Hendriks said, “Although they don't have the face-to-face availability of some banks, their phone service is superb, not to mention their products. You get to speak to a real person, in England, who is knowledgeable about what they have and how it works for you and, wait for it, helpful! It's so refreshing to have a bank that generally seems to recognise its customers are human beings and treats them that way.”

One customer, Karen Hill said, “In September, my mother died. I was in pieces for a few weeks, sorting everything out, contacting relatives I hadn't spoken to in years - paying my credit card bill was the last thing on my mind. By the time I remembered, I'd missed the payment date (on both cards) and, obviously, incurred a late payment charge. I was so mortified that I contacted Barclays to explain why this had happened - and Barclays waived BOTH the late payment charges! I was surprised and touched at this - it just goes to show that banks can be human, after all. So well done, Barclays.”

There is a very definite theme among current accounts switchers. The overall rating given by this group shows a satisfaction score of 97% which is a fantastic and demonstrates that switching banks can work, with one customer calling switching banks “the best financial decision I have ever made.”

Packaged accounts look set to be the next PPI with a number of claims management firms popping up over the last few months. That said, our customer reviews show that packaged accounts are actually higher rated than the basic versions, suggesting that customers still see value in package accounts.

Digital channels are becoming increasingly important in banking. However, while 10% of all reviews mentioned digital/mobile technology, 38% of customers focused on the role of good customer service. Moving customers to digital channels is a priority for the industry, but maintaining high levels of customer service remains an important value driver for customers. First Direct shows that you can get the balance right.

It’s really interesting to note that Business bank accounts are the worst rated product on Smart Money People (with 23% rating them as 1 or 2 stars). In this market, the “big four” banks (HSBC, Barclays, RBS and Lloyds Banking Group) hold an 85% market share, and a Competition and Markets Authority (CMA) inquiry is currently underway into competition in the Business Bank Account market.
One Business Bank Account customer said “As long as you require no assistance then they (Lloyds Bank) are OK (no money has mysteriously vanished from my account, etc). BUT, getting in touch with them in any way other telephone is impossible.”

All banks featured in our league table have harnessed social media to better engage and respond to customer queries. Many customers like the use of Twitter to resolve queries quickly and appreciate banks adopting communication channels that they want to use.

In fact the overall rating given by those customers mentioning social media in their review was 87% marking this set of customers as among the happiest. 47% of all reviews discussed the multichannel banking experience, showing that customers value the ability to switch seamlessly between digital, branch and social media when communicating and transacting with their bank.
Commentary

We are able to make available reviewers for additional commentary.

Smart Money People was launched in October 2014 and is a start-up with a strong mission: to use the power of customer reviews to increase trust and transparency in financial services

Founded by Mike Fotis, 26, the ex-Deloitte management consultant who worked across retail banking and insurance, is passionate about forging stronger and more positive relationships between customers and the financial services industry. He is a graduate of the Judge Business School, University of Cambridge.