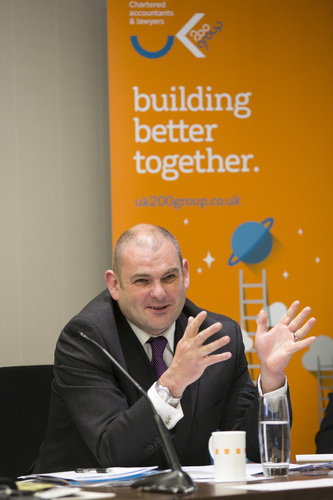 if there was one message that came out more clearly than others it is the need for clarity, simplicity, and consistency

On Friday 30 September, the Office for National Statistics will release final economic growth figures for the second quarter of 2016: 1 April to 30 June. Its provisional figures for the period estimated that gross domestic product (GDP) had grown 0.6% since Quarter 1 of 2016, and 2.2% since Quarter 2 of 2015.

The figures are sure to raise speculation on how the economy has fared since the EU referendum. A number of surveys have seen a dip in business owners’ confidence for the future, but how has their perception of growth been affected?

A recent survey issued by the UK200Group – the UK’s leading association of independent, quality-assured accountancy and law firms – in conjunction with member firm and chartered accountants Hillier Hopkins LLP, shows that 65.4% of private business owners have noticed no change in new business enquiries or sales since the Brexit vote.

The remainder were split: with reference to new business enquiries, 10.3% felt that their situation had improved and 12.6% felt that it had deteriorated.

In terms of sales, 11.2% believed that the situation had improved and 11.7% felt that it had deteriorated.
Overall, 11.7% of respondents felt that new business enquiries and sales were not relevant to their particular organisations.

The report was presented to the UK200Group’s Brexit Forum, a newly-formed group that met to discuss the implications of Brexit for their clients, notably SMEs, owner-managed businesses and privately-owned businesses.

The survey was completed by 238 of the UK200Group’s members and their clients up until 2 September.
Respondents were divided into three groups: those with concerns about Brexit, those who were confident and those who were unsure. Some 78% of those asked thought that economic forecasts are no more reliable than weather forecasts. There was an underlying theme of distrust of politicians as well.

When asked what would be most likely to allay their business fears, respondents who had said they were worried about Brexit responded strongly that they would be reassured if:

1. The government would enter into a set of trade agreements with the EU similar to the old Common Market

2. The government would agree with the EU that there will be no tariffs imposed on cross-border trade

3. They could be sure that after the political arguments, sterling will revert to its usual levels

The report’s conclusion, written by Jonathan Franks of Hillier Hopkins LLP, says, “The survey shows that entrepreneurs fear recession and the uncertainty. General economic slow-downs and the uncertainty which drives economic failure, are always bad for business. Concerns about trade tariffs, currency strength and the property market, which supports underlying business borrowing, were all important.

“The survey noted both opportunities and risks around Brexit, from trade tariffs and damage to the EU itself, to the possibilities of creating new advantages in a more tax favourable environment once the EU is no long restricting government policy.

“A recurring theme is that there were two very different stances taken regarding the free movement of people. This has been generally accepted as the most difficult area for government to balance correctly, irrespective of its impact on Single Market negotiations. Our population was divided fairly equally between those who were confident that the UK did not need migration on the one hand, and those who fear that curbing migration will have a seriously detrimental impact on the availability of appropriate labour.

“Above all, most businesses reported that, since 23rd June, very little has changed. Those who imported noted increased costs, doubtless because of currency movements, and this should not be underestimated. The real change is in confidence, which has suffered significantly, and if there was one message that came out more clearly than others it is the need for clarity, simplicity, and consistency. These are not things the business community has been used to seeing over recent years, but with a new government we are all hopeful.”

Jonathan Franks added, “One outcome of the survey that I found slightly surprising is that, although only around 15% of respondents were engaged in imports or exports, concerns about tariffs and exchange rates were the most all-pervading issues raised.

“This can be explained because of the probable repercussions of an increase in import and export costs would be further-reaching as they cascade along the supply chains.

“For example, a firm may provide services, or sell constituent parts, to a client who exports or imports. If that client’s trade is affected, the supplier is likely to feel the effect too.”

James Abbott, President of the UK200Group, said, “One of the most surprising things that the report expressed is that, for the majority of firms, very little has changed.

“The UK200Group’s members act for over 150,000 owner-managed businesses, and over the coming months and years the owners of those businesses will turn to them for advice and reassurance. Our job as an association is to collaborate and talk to one another, so that when decisions are made and new regulations or business conditions come into place, we are well-placed to offer clear and confident advice as quickly as possible.”

Those who completed the survey were also invited to leave a comment on their views on Brexit, a selection of which can be found below:

• “It would be interesting to learn from businesses in the UK who have a worldwide or Europe-wide remit, if they are considering either moving some more work into the EU or setting up new plants in the EU to capitalise on free movement of goods and people in the future.”

• “Please do not let politicians get away with abandoning the greatest example in history of reconciliation and cooperation between former enemies and countries that have emerged from totalitarianism, in favour of preferential bilateral 'free trade' deals with communist China, undemocratic Russia etc.

“Similarly do not allow bogus 'free trade' rhetoric to be allowed to dodge our responsibilities to our future by dismissing action on climate change as red tape, and repealing it.”

• “It is very difficult to judge the immediate consequences because in the summer, and particularly July and August, activity levels are always lower.”

• “I believe that it is very important that we accept the result and quickly move forward, keeping a positive outlook and reassuring those that invest in UK that we will get through this in a successful manner.”

Hillier Hopkins LLP is a UK200Group member and a top 50 firm of chartered accountants with four offices in London and the home counties. The firm was established in 1933 and provides advice and support to individuals and businesses ranging from small family enterprises to large international corporations.