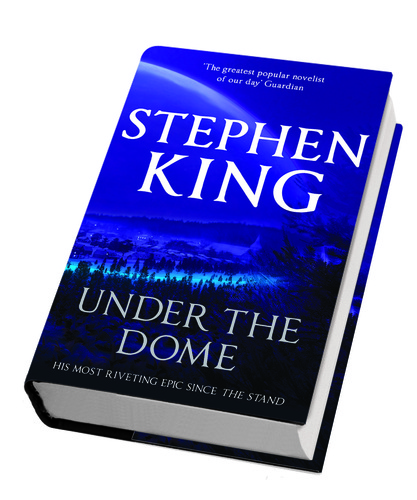 Extracts of the book have been hidden across Stephen King fansites as well as horror, thriller and lifestyle websites, and offline

Today Stephen King’s UK publisher Hodder & Stoughton launches the biggest ever game of literary hide-and-seek. His much-awaited epic novel UNDER THE DOME, featuring over 100 characters and running to 336,114 words, has been broken into more than 5,000 snippets (scattered across hundreds of websites and locations throughout the UK) as a way to celebrate the breadth of this masterpiece and to give fans a one-off opportunity to piece the book back together before its general release on 10th November.

Extracts of the book have been hidden across Stephen King fansites as well as horror, thriller and lifestyle websites, and offline. Fans are invited to continue this hiding process and also to find the snippets using the clues given on www.stephenking.co.uk and deliver them back to the website.

UNDER THE DOME is King’s most epic creation since THE STAND. The story explores what happens to a Maine town when an invisible barrier suddenly seals it off from the rest of the world, in a perfect example of a King thriller.

“I tried this once before when I was a lot younger, but the project was just too big for me. But it was a terrific idea and it never entirely left my mind . . . and every now and then it would say write me, and eventually I did. I sure hope people like it.”

More on the hide-and-seek

As pieces are found they will appear on www.stephenking.co.uk, enabling fans to move them around and link them together to form bigger sections of the book. Also on the site are clues to help ‘seekers’ find text and a forum for fans to discuss the snippets they’ve found.

All those playing the game to uncover this hidden masterpiece will be entered into a draw to win a weekend in a London hotel to read a limited edition copy of the book the weekend before its general release. Closing date is 6th November.

A creative writing competition also gives aspiring novelists the chance to have a 2,000-word piece of work judged by King himself.

The final pieces of the book will be released on Saturday, 7th November at a stunt in London, giving players a last-minute chance to piece together more snippets.

For a chance to win the UNDER THE DOME hide-and-seek competition, visit www.stephenking.co.uk Clues and news are also available on Twitter (@under_the_dome) and Facebook group: http://www.facebook.com/group.php?gid=155501074886

Stephen King is the author of over forty bestsellers. Many of his books have been turned into world-class movies, including THE SHAWSHANK REDEMPTION, STAND BY ME, MISERY and THE GREEN MILE. He is the winner of the National Book Foundation Medal for Distinguished Contribution to American Letters 2003 in the USA and lives in Maine – close to where he has set a number of novels, including UNDER THE DOME.

Published by Hodder & Stoughton, UNDER THE DOME will be on general release from 10th November, RRP £19.99.

Unity is... an agency that builds brand friendship, brand fans and above all, brand love.