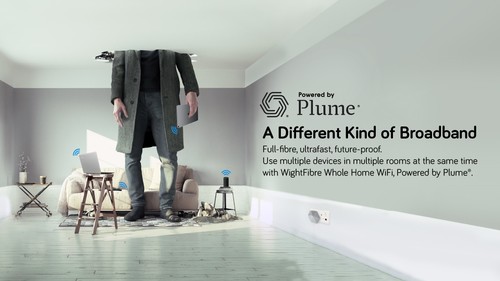 • Plume is your broadband’s new best friend
• Flawless Wi-Fi throughout your home - guaranteed
• Includes AI-powered security to protect all connected devices, and advanced parental controls to bring peace of mind

"Most broadband problems experienced by customers are actually caused by poor in-home Wi-Fi coverage. WightFibre is delighted to team up with Plume to bring our customers the best ever broadband experience with personalised Wi-Fi, security and parental controls included," said John Irvine, CEO of WightFibre. "WightFibre’s new full fibre broadband requires the best possible Wi-Fi connection and Plume provides that and much, much more."

"We are delighted to partner with WightFibre to bring the full suite of Plume Smart Home Services to its customers," said Niall Robinson, VP Business Development, Plume. "Plume membership enables WightFibre to bring a uniquely differentiated offering to its subscribers that meets the needs of the evolving smart home, both now and in the future, through a highly scalable services delivery platform."

WightFibre Whole Home WiFi, Powered by Plume gives customers the following services:
• Plume Adaptive WiFi which intelligently monitors, adjusts and optimizes your network for peak performance
• HomePass® which lets customers control guest and child access to their network, set up profiles, and pause the Internet
• AI Security to detect and block potential security threats, customise content access and block unwanted ads
• Elegantly designed, powerful tri-band SuperPods that plug directly into wall sockets to ensure fast and reliable coverage throughout the home, to every device
• The highly rated Plume app which puts the customer in control of all of these services

Every full fibre customer will receive a Plume SuperPod™ - to immediately provide improved Wi-Fi coverage - included in their basic broadband package. For an additional £9.25 per month WightFibre will provide up to two further Plume SuperPods (total three SuperPods) together with guaranteed WiFi coverage throughout your home or your money back. Terms and conditions apply.
- Ends-

About WightFibre
WightFibre provides full-fibre, ultrafast broadband to the Isle of Wight. We want the Isle of Wight to be the best-connected island in the UK – so we can improve the lives of everyone on the island.

WightFibre is committed to providing the best possible local customer service and support to our customers.

Our recent £35M investment will see our network upgraded to full fibre broadband. This network will reach over 60,000 of the 70,000 homes on the island by the end of 2021, delivering speeds of 900Mb and putting the island at the forefront of the digital economy.

About Plume®
Plume is the creator of the world's first Smart Home Services Platform. As the only open and hardware-independent solution, Plume enables the curation and delivery of new services rapidly and at massive scale. The Plume service bundle which includes Plume Adaptive WiFi™, HomePass®, and AI Security™ is managed by the Plume Cloud, a data- and AI-driven cloud controller currently running the largest software-defined network in the world. Plume leverages OpenSync™, an open-source framework which integrates into a broad set of silicon & platform SDKs for connection to the Plume Cloud. Plume's smart home service and back-end product suites are proven to help communications service providers around the globe deliver on the promise of fast and reliable internet throughout the home, while increasing ARPU, improving NPS, and reducing call-in rates, truck rolls, and subscriber churn.