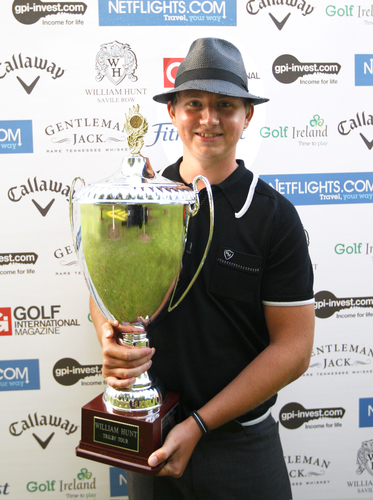 'Tom the Giant Killer' - the kid who came out of nowhere to beat the top European Tour Pros in a grand Winner Takes All face-off.

Shooting a score of minus three to qualify in the four-man play-off Tom Reid faced overwhelming opposition from top European Tour pros Phil Golding and Phil Archer, beating both seasoned players with a 43 foot putt to clinch the title.

The outsider to win, young budding golf star Reid says his victory was 'surreal but fantastic.'

The 25 yr old Fulwell Club member first featured in the Trilby Tour as a caddy in 2007 and entered outright this year in the pro division.

His first tournament win since turning professional two years ago, Tom Reid calls his victory 'the best day of my career.'

The young struggling golfer describes how he almost quit his dream profession, saddled with rising debts and forced to juggle two jobs to cope.

His prize in the Winner Takes All contest includes a year's clothing contract with William Hunt, an equipment contract with Callaway and £10,000 prize money. Reid declares he will use the prize money to clear his debts:

"I'm going to clear my credit card bill and the rest of it will go in an account to go towards my tournament fees and all I need to get ahead as a pro. "

The Trilby Tour is a one day 18-hole tournament pitting the top four finalists in a grand Winner Takes All shootout.

The tournament was originally created by William Hunt to give up-and-coming professionals a stepping stone to reach the heights of pro stardom and win the funding needed to further their career.

Reid finishes: "For someone like me who was struggling it could not have been better. I came here with nothing - and all of a sudden my life and career has changed in one day."

"To see a kid like Tom Reid come out of nowhere and take on the best in the country and win is brilliant - it's what the Trilby Tour is all about.

I call him Tom the Giant Killer - for taking on two giants in the golf world and coming out on top. Tom is a terrific young guy with a great future ahead of him.

His talent, combined with his attitude and work ethic will see him go far. I believe he has what it takes to get to the top."

Reid will use his win to help propel him further towards his goals:

"My aim is to continue winning tournaments and obtain sponsorship. I want to be amongst the top fifty players in the world and a Ryder Cup Player."

Professional entrants for 2011 Trilby Tour can enter by paying a £50 deposit online at www.williamhunttrilbytour.com