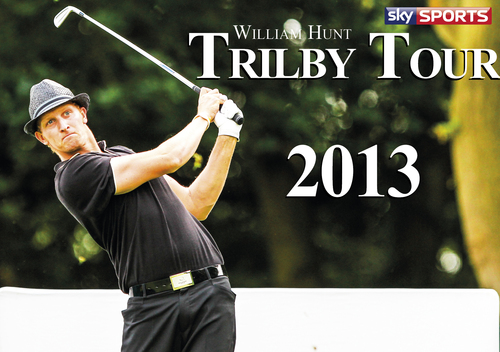 The Trilby Tour is about re-defining the game of golf and taking it to new heights.

The prestigious amateur golf tournament, now in its 7th year, will host a series of Regional Championships across the UK to find the Amateur Champion 2013.

The Grand Final will take place at 5 Star Championship Course at Rockliffe Hall, Durham on 28 August 2013.

Each Regional Championship is broadcast on Sky Sports as part of the Trilby Tour series.

With annual viewership figures of over 2.5 million (since 2011) the Trilby Tour is officially the largest Amateur golf television series in the UK and Europe.

Golfers have hailed the Trilby Tour as the closest experience to a Professional tournament, playing under the pressures of an international televised event. Die-hard fans return year after year gripped by its fierce competitive format.

Current reigning Champion Carl Powell won the Amateur Championship in 2012 at Stoke Park beating a field of over 1200 amateur golfers to clinch the title.

The 41yr old father of two from Ormonde Fields GC in Ripley, Derbyshire came out top in the 4-man, 3 hole final play off with a score of 36 points.

"The Trilby Tour is about re-defining the game of golf and taking it to new heights.

It’s about constantly challenging yourself and becoming greater than you ever thought you could be.

People don’t think about golf as an extreme sport but that is precisely what the Trilby Tour is – taking the game and pushing it to the limit.

This year we have introduced new venues to the lineup with a Wales Championship for the first time.

The Trilby Tour is the only event that offers amateur golfers a truly professional experience. There are no half-measures - the pressure is relentless and it’s winner takes all.

In front of the crowds and cameras there is no place to hide. I can guarantee it will be a day to remember for the rest of your life.

Each year we raise the bar in the amateur golf game. We strive for excellence.

This year we are staging the Grand Final at Rockliffe Hall in Durham. It’s a fantastic venue and offers one of the most challenging courses in the UK.

We’ve held the Durham Championship at Rockliffe Hall previously and there was such a buzz about the place that we are staging the Grand Final there this year. It’s going to be an epic showdown!

Though the Trilby Tour has grown bigger and bigger each year the ethos remains the same as the day we started: to redefine the game of golf and push players to the limit."

“The William Hunt Trilby Tour is one of the biggest and most stylish amateur competitions in the UK. The regional heats have always been a massive success and we are delighted to have been chosen to host the grand final. The tournament is fiercely competitive and we’re really excited to host the event along with so many others already planned for 2013.”

New additions to the Trilby Golf Brand for 2013 are the Matchplay Championship and Better Ball Pairs.
For more information and to enter online go to www.williamhunttrilbytour.com

About the Trilby Tour
The Trilby Tour is a multi event amateur golf tournament event created by William Hunt in 2007 where amateurs compete under professional conditions for the chance to win the top Winner Takes All prize.

It has since grown at an incredible pace to become the biggest and most stylish amateur golf tournament in the UK.

Each round is broadcast as part of a summer series on Sky Sports with the top prize going to the winner of the final event.