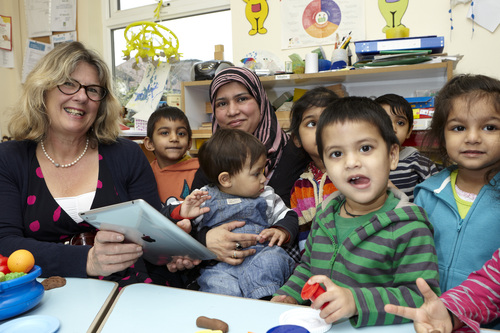 Olly, the adorable, big-hearted and cheeky little white van is proud of his ‘Little Helpers’ at the Mountbel Montessori Nursery in Stanmore, Harrow. Judged to be the best ‘Little Helpers’ in the land, they received their ipad prize in a visit from the creators of Olly.

The animated series aimed at boys and girls aged 3-6, is a huge hit with children, helping them learn how they can follow Olly's lead at home, nursery and school, by helping themselves, their family, other people and even the environment - all while having fun too! Olly is a great role model for children in developing relationships and citizenship.

Mrs Kubra Jiwa, from the Mountbel Montessori Nursery, said she “is always keen to encourages her little ones to embrace the concept of helping and firmly believes that ‘sharing is caring’”.

Olly has his own Little Helpers Club which young fans can join free online at www.ollyslittlehelpersclub.com. In the Kids Zone, there are engaging activity sheets, club goodies and access to previous ‘Olly’ episodes. Kids will love the downloadable activity sheets, class posters, stickers, certificates, and badges. Parents also have their own ‘Zone’ to help them encourage their little one(s) to get involved with helping out at home. There is also a dedicated Teachers’ Zone providing teachers with the right tools to help inspire children to have fun whilst helping others.

Pictured here with the winning class and their teacher is Philippa Becket, co-creator of Olly the Little White Van, wife of the originator, mother of Olly (now aged 31), and retired teacher. Her input has helped make Olly so much more than an entertaining TV series, with its core values of helping, citizenship and community - as well as fun, energy, music and silliiness.

Since Olly first came to children’s TV, he has been taken to the nation’s heart. Young viewers are captivated by Olly, voiced over by Justin Fletcher, MBE, the star of Mr Tumble, Gigglebiz and Justin’s House.

Olly airs three times daily on Cartoonito and is shortly to also appear on Boomerang.

1. Olly is heralded as the most helpful character on children's TV and the show introduces the concept that the young children of today are 'Britain's Little Helpers'. The series itself is all about empowering children to have fun whilst helping others and to believe that it's good to lend a helping hand where they can.
2. Olly lives in the magical town of Bumpton. This thrilling place is a fantastical Utopia for children with vivid landscapes around every corner; from the seaside, to the snowy mountains, the countryside and city.
3. The series is created in 3-D HD CGI, and made in the UK by an award-winning team of writers, animators and composers.
4. Olly the Little White Van is UK made and privately funded.
5. Olly’s Little Helpers’ Club aims to inspire young children to follow Olly the Little White Van’s lead - by having fun whilst helping others!
6. Olly’s Little Helpers’ Club has being developed in conjunction with child psychologists, parenting and educational experts.

A corporate social responsibility consultancy, embracing education and safety in the community.