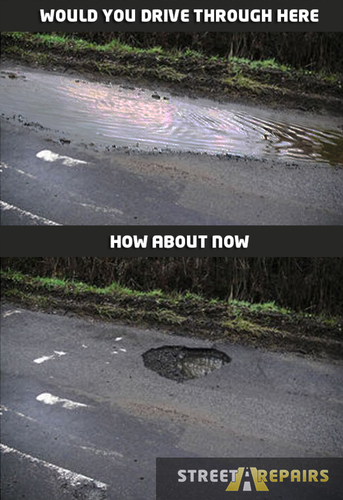 Owner of the website Colin Mahoney said: “The reaction to the first National Pothole Day was overwhelming with the national press, Sky TV, ITV, BBC, all greeting its launch with enthusiasm. Reports of potholes increased dramatically with over 88 per cent of reports now relating directly to potholes and increasing the awareness nationally of the seriousness of the problems and potential dangers relating to the disrepair of our roads.”

In 2013 two enterprising young men felt enough was enough - our road infrastructure was falling apart, as local authorities and the Government saw an easy target for constant budget cuts in road transport. The two guys decided to do something positive to help combat the UK's ever deteriorating roads and pavements and had the bright idea of setting up www.streetrepairs.co.uk

Using their accumulated experience of creating innovative web sites and software they designed “Street Repairs” as a user friendly, geographically driven centralised forum for you and I to report those annoying defects. Every report entered serves to highlight issues to those local authorities that let their highways fall into disrepair. It quickly caught the imagination of more than a long suffering public, as well as praise from the likes of the RAC and Auto Express. The 15th January 2015 saw the successful launch of NATIONAL POTHOLE DAY, the very first of its kind here in the UK - and now www.streetrepairs.co.uk is looking forward to the second NATIONAL POTHOLE DAY on 15 January 2016.

A wholly self financed idea, free of external investment, “Street Repairs” is out there helping communities, ratepayers, and taxpayers alike. It also helps local authorities better manage worn out highways countrywide. National Pothole Day sees an enthusiastic response from the public keen to address the safety and financial issues involved.

"The highway authorities and their insurers are starting to sit up and taking notice of “Street Repairs”. They have to! We are a force fighting for you, the public”, Mahoney stated.

The 15th January 2016 is the big day for UK motorists to have their say. A THUNDERCLAP will be used for the first time https://www.thunderclap.it/projects/34804-national-pothole-d...

Watch this space for more information as we countdown to NPD.

You can also find our free App here http://streetrepairs.co.uk/app

Let’s get the UK driving or riding on the roads they deserve, and the roads their taxes have actually paid for!