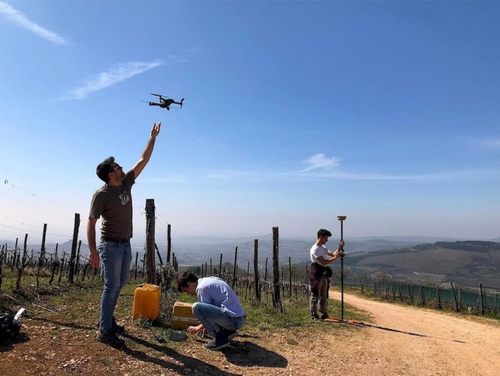 The Consorzio of the Soave wine region has embarked on a pioneering project called Soilution System, to study the impact of soil erosion in the vineyards of the region, and to help producers develop and maintain techniques to protect their soil.

The United Nations is focusing attention on the importance of healthy soils, and working on techniques to help the sustainable management of soil resources through its World Soil Day on 5 December.

Soave’s steep, terraced vineyards, dotted with ancient castles, form one of the oldest recognised wine zones in Italy. One of Italy’s most exported and well-known elegant white wines, Soave has in the last decade become more known for premium wines grown on the historic hillsides. The producers’ Consortium has focused on the sustainability of its vineyards, which are predominantly on terraced, steep slopes that are susceptible to soil erosion. The wines are once again growing in popularity in the UK and are being considered by some critics as an alternative to Burgundy. The region makes only white wines, from the Garganega grape, one of the oldest grapes of Italy.

This new project will use drone technology to analyse the flow of rainwater down steep slopes, so as to minimize the emergence of the small channels that contribute to soil erosion. The data gathered by drones will then be used to ensure the better management of soils in areas of this high hydro-geological risk, such as Soave.

“The Soilution System is probably one of the most innovative projects we have ever implemented”, explains Aldo Lorenzoni, Director of the Soave Consorzio. “Its objective is to increase environmental sustainability through practical and cost effective, yet ground-breaking, solutions. We want to empower our producers to become custodians of this historically significant land and help preserve their environment.”

The project is being undertaken by the Consorzio of Soave and Lessini Durello, the University of Padua, the World Biodiversity Association (WBA), and AGREA Srl.

Soilution System’s aims are to:
• help find mechanical alternatives for use in hillside vineyards which will minimise environmental impact;
• provide low cost solutions for producers
• encourage the use of indigenous mixtures of herbaceous species, to prevent soil erosion and preserve and increase biodiversity.

• The Soave wine region and community were last year awarded Globally Important Agricultural Heritage System (GIAHS) status by the United Nations for their deeply interwoven agricultural traditions and practices. GIAHS was launched by the United Nations in 2002, to conserve historical agricultural systems that give rise to distinctive and sustainable communities and landscapes. The goal is to recognise the economic, natural and human value of enduring agricultural heritage.

GIAHS sites have been recognised all over the world, and include the Muscatel raisin vineyards of the Malaga mountains in Spain, the saffron fields of Kashmir in India, and the traditional wasabi fields of Shizuoka in Japan.

• World Soil Day (WSD) is held annually on 5 December as a means to focus attention on the importance of healthy soil and advocating for the sustainable management of soil resources.
An international day to celebrate Soil was recommended by the International Union of Soil Sciences (IUSS) in 2002. Under the leadership of the Kingdom of Thailand and within the framework of the Global Soil Partnership, FAO has supported the formal establishment of WSD as a global awareness raising platform. The FAO Conference unanimously endorsed World Soil Day in June 2013 and requested its official adoption at the 68th UN General Assembly. In December 2013 the UN General Assembly responded by designating 5 December 2014 as the first official World Soil Day.
• The Consorzio di Tutela del Soave e Recioto di Soave
In 1931, Soave was the first zone in Italy to be mapped and recognised by Royal Decree as having the potential to produce fine wines.

In 1968 the modern Soave DOC was created, and a year later the Consortium was founded to promote and develop the appellation. In the last decade there have been a number of sweeping revisions to the Soave DOC and DOCG, with the objective being to increase the quality of the wines and allow the quality potential in Soave’s terroir to be fully expressed.

In 1998, Recioto di Soave – the sweet wine made from dried Garganega grapes - was granted DOCG status.