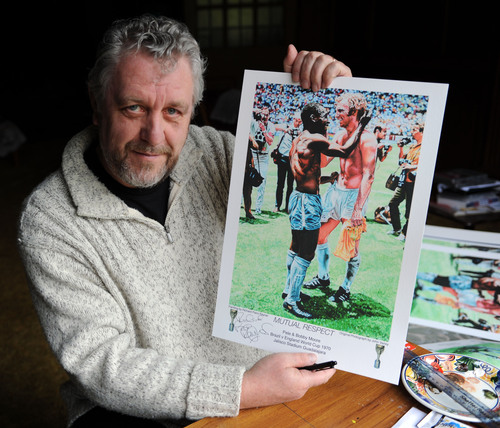 One of the most iconic and endearing sporting photographs ever taken – of footballers Pele and Bobby Moore swapping shirts - is to get an artistic makeover thanks to a renowned artist whose previous work was made into an Oscar and BAFTA-winning film. What’s more you have the opportunity to own a limited-edition print version of the new painting.

British artist Richard Piers Rayner illustrated 300-pages of the book ‘Road to Perdition’ which was adapted for the screen by Sam Mendes in 1992 and starred Tom Hanks, Paul Newman and Daniel Craig. Such was his work that Steve Spielberg, who produced the movie, said: “This is great. I don’t even need storyboards. All the work’s been done for me.”

Now, football fan Rayner has turned his talent to one of the most famous sporting pictures ever taken.

Stockton-born, Rayner has also worked for DC Comics in America on Hellblazer, Batman, Swamp Thing and Legion, and for Marvel illustrating Dr Who, X-Men and Captain America, has now turned to his love of football to give his unique artistry to this memorable image.

Rayner says: “I loved the rare and irresistible opportunity to recreate one of sports defining images. In a brief moment at the end of the game opponents acknowledge the sportsmanship of their contest. There is no better reason to call it the ‘Beautiful Game', and no better challenge than to bring all that colour and drama back to life.”

The original photograph, taken by John Varley at the Estadio Jalisco Stadium in Guadalajara, Mexico 7 Jun 1970, shows Bobby Moore and Pele swapping shirts following England’s Group C defeat at the hands of Brazil. Quoted as being Bobby Moore’s ‘favourite photo’, the then world champions were effectively handing over the baton of world supremacy to champions-elect and the world’s greatest-ever player.

This limited edition ‘Mutual Respect’ print (33cm x 44cm) of the painting by Richard Piers Rayner is available for £175, and includes courier dispatch and first-class packing. These prints are not framed but come fully mounted and ready for framing on high quality art paper. Each copy is signed by the artist and numbered 1-500. There will be just 500 limited-edition prints available and each comes with a certificate of authentication. A black-wooded framed version is available for £225 (inclusive of delivery).

For interviews with Richard Piers Rayner, or find out the story behind the famous photograph taken by John Varley contact
Les Rowley on 07976 746 777 or lesrowley@yfppublishing.com

To own a limited-edition print of the painting by Richard Piers Rayner log on to www.yfppublishing.com

Copyright of the original photograph belongs to Varley Picture Agency. Use of photo strictly for editorial purposes relating to the painting by Richard Piers Rayner.