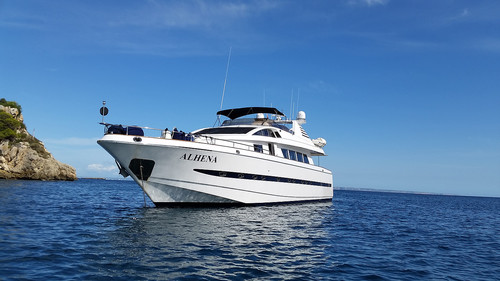 The Lauren Currie Twilight Foundation will be auctioning a spectacular three-day charter on a luxury yacht at its Black & Red Ball on Friday 16 September at the Glasgow Radisson Blu hotel. The charter will be among numerous auction lots available at the milestone event which will see the charity reach it’s £500,000 donation mark.

Luxury super yachts Lady Tatiana and Lady Alhena have been entered into the auction by White Star Charter based in Palma de Mallorca, Spain. Boasting five cabins with ensuite bathrooms, the yachts can easily accommodate 11 guests and the four crew members in complete comfort. The super yachts, currently moored at their home port in Palma, will be available to use between November 2016 and March 2017.*

The three-day charter will be part of a fund-raising auction at the Black & Red Ball hosted by the Lauren Currie Twilight Foundation. For the first time the auction will be available to guests at the event and also to bidders online.

Lauren’s Father Grant Currie said, “This year’s Black & Red Ball is an incredibly important milestone for the foundation as we would have been celebrating Lauren’s 21st Birthday.

“We are extremely fortunate that businesses and individuals are donating so many wonderful prizes to the auction, their generosity will help us raise awareness of vasculitis on an international level within the medical community and the general public. There is a great need to encourage earlier diagnosis, it will reduce cases of severe organ damage and save lives.”

Tickets for the ball are priced at £65 for a single ticket, £650 for a table of ten and £780 for a table of twelve. Included with the ticket or table booking is a drinks reception, three course meal, wine, entertainment from headline act Five, entry into a raffle and also the amazing auction.