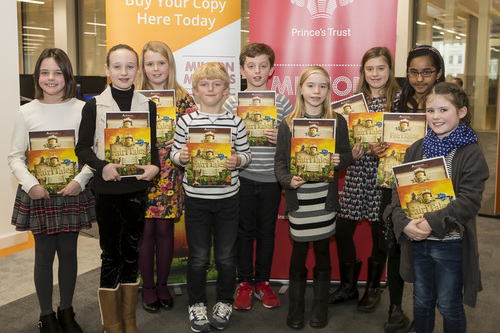 Ten young authors have turned to technology to create a modern technology twist on the traditional fairy tale which has resulted in a special book of ‘FairITales’, officially launched today in Birmingham. The book features tall tales of techy princesses, smartphone-carrying knights in shining armour, tweeting piglets and gadget-loving goblins - we’ve even got Alice in DigiLand - all of which will raise money for The Prince’s Trust.

The team from Advanced devised FairITales as part of their involvement with The Prince’s Trust Million Makers competition, which aims to raise over £1 million nationwide.

The Million Makers challenge sees businesses from across the UK competing to raise as much money as possible over six months for The Prince’s Trust.
Money raised will go towards helping disadvantaged young people to turn their lives around. Three in four young people supported by The Prince’s Trust move into work, education or training.

Today’s fundraising event was hosted by Advanced, who had been inspired to create a competition inviting young children aged from six to 11 to write a creative ‘FairITale’ for the modern era, with the top 10 winning stories chosen for the book. The perfect gift for Christmas, Advanced is hoping to raise over ten thousand pounds for the charity.

Two Young Ambassadors from The Prince’s Trust attended the event, both to thank the young authors for all their efforts for the charity and to inspire more young people to get involved in future.

Prince’s Trust Ambassador Deborah Meaden, investor from the BBC’s Dragons’
Den show, is supporting the Million Makers competition as it turns ten.
Deborah says:
“As a successful entrepreneur myself, I’m delighted to be able to support The Prince’s Trust Million Makers competition. Million Makers is an excellent way to encourage new ideas whilst also raising valuable funds to help young people. The companies that take part are doing a fantastic thing, and we should all be encouraging them in whatever way possible.”

Sally Scott, Chief Marketing Officer at Advanced, commented: “Although we are naturally advocates of the benefits of technology, this doesn’t preclude us from being huge supporters of creative thinking and writing. What this collection of fairy tales shows is how important it is to continually reimagine the way in which we do things - we’ve been astounded by the ingenuity demonstrated in the stories which shows how the fairy tale can still be very relevant to children today. These traditional tales have been transformed by these children, making them relevant to the digital era in which we live, but with humour and creativity.”

“We were overwhelmed with the take up from children and enthused when picking the winning stories. We are constantly led to believe that children are far keener to pick up a device than read a story but we hope this FairITales book challenges that opinion. Contrary to expectations, the printed book is still surviving alongside its upstart e-book cousin, and technology is helping publishers and retailers reach new audiences and find new ways to tell stories.”

The winning stories and authors are as follows:

For those unable to attend on the day, books will be available at Advanced’s offices on the third floor of The Mailbox or can be ordered online at https://oneadvanced.com/fairitaleswriting

Special thanks go to Graymatter, who donated their design skills and produced the creative imagery for the book and to Firework PR for coordinating the launch communications.

The Prince’s Trust National Million Makers Competition sees businesses from across the UK compete over six months to raise the most money for The Prince’s Trust by setting up their own mini-enterprises. Teams compete to turn seed funding into a profit of at least £10,000 or more. The aim is to raise at least £1 million nationally. All funds raised will directly support unemployed young people into work, education or training. Since its launch in 2008, Million Makers has proved popular with companies wanting to develop the skills of their employees through real-life action learning whilst raising their profile through socially responsible activity. As the competition turns ten, Million Makers has launched its ten for ten campaign – aiming to reach the milestone of £10million raised since the competition began ten years ago.

Through our enterprise and market focused solutions we positively impact millions of people’s lives through continually investing in our people, partnerships and own technologies to stay focused on our markets’, customers’ and their stakeholders’ needs.
We enable our customers to drive efficiencies, savings and growth opportunities through focused, right-first-time software solutions that evolve with the changing needs of their business and the markets they operate in.
True partnership is the defining thing that makes us different from the competition.
We pride ourselves on delivering focused software solutions for public sector, enterprise commercial and health & care organisations that simplify complex business challenges and deliver immediate value.

Advanced is a Sunday Times Top Track 250 Company 2016 and was ranked in the Deloitte UK Fast 50 which recognises the 50 fastest growing technology companies in the UK and a winner of the Tech Company of the Year in PwC’s UK Tech Awards in 2014.

About The Prince’s Trust

Youth charity The Prince’s Trust helps disadvantaged young people to get their lives on track. It supports 11 to 30 year-olds who are unemployed and those struggling at school and at risk of exclusion. Many of the young people helped by The Trust are in or leaving care, facing issues such as homelessness or mental health problems, or have been in trouble with the law.

The Trust’s programmes give vulnerable young people the practical and financial support needed to stabilise their lives, helping develop self-esteem and skills for work. Three in four young people supported by The Prince’s Trust move into work, education or training. The Prince of Wales’s charity has helped 870,000 young people since 1976 and supports over 100 more each day.