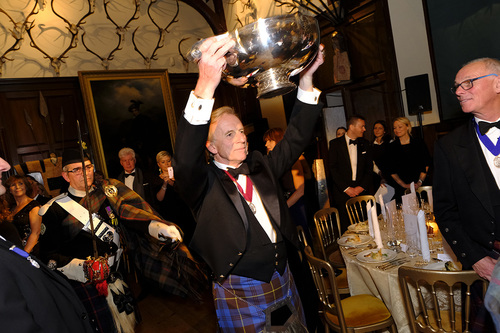 The global success of Scotch Whisky has been celebrated with 45 new members of the Keepers of the Quaich being inducted into the international society at a private ceremony held at Blair Castle in Blair Atholl on Monday 8th April 2019. This is the 60th Ceremony and Banquet to take place here.

Guests at the prestigious event were addressed by the respected publisher and broadcaster
Andrew Neil, who was also awarded the role of Honorary Keeper of the Quaich.

Keepers of the Quaich was established by the Scotch Whisky industry to recognise the outstanding commitment of those who produce or promote the world’s finest spirit. To qualify, new Keepers must have worked in the industry for a minimum of seven years.

To date, just over 2,700 men and women from more than 100 countries have received the honour.
A select few are subsequently distinguished as Master of the Quaich. The society will award only five Masters of the Quaich at each ceremony of induction. Masters are those who, since being inducted as a Keeper over ten years ago, have made an exceptional contribution to Scotch Whisky. Collectively, the society represents many thousands of years of experience and knowledge.

“Scotch Whisky was, and remains, the first global spirit and Keepers of the Quaich exists to recognise and celebrate the exceptional contribution of people working in all aspects of the industry, all over the world.” said Peter Prentice, Chairman of the Society. “At the ceremony we inducted new Keepers from no less than 16 different countries which demonstrates the continued popularity of Scotch Whisky.”