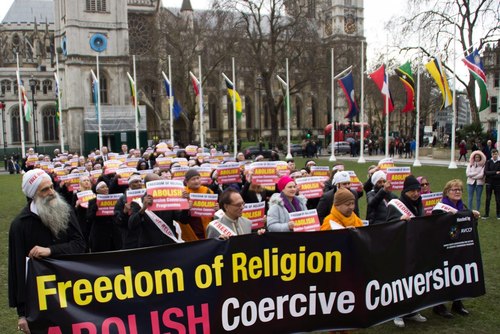 In the wake of the recent meeting discussions between Presidents Trump and Kim Jong Un, members of UK religious communities rallied to appeal to the South Korean government to investigate religious leaders involved in programmes called “coercive conversion” that recently led to the death of a young woman. The rally was co-hosted by the AVCCP (Association for Victims of Coercive Conversion Programs) and IWPG (International Women’s Peace Group).

Hundreds of people, including high-profile leaders and members of the London Christian, Buddhist, Sikh, Islamic, and Jain communities, gathered to protest this human rights violation on Saturday 10th March in Parliament Square.

UK supporters at the rally could relate to this issue, since radicalisation is a growing cause for concern in the UK. In particular, British prisons are addressing an increase in forced conversions to Islam, as has been reported by the Prison Officer’s Association.