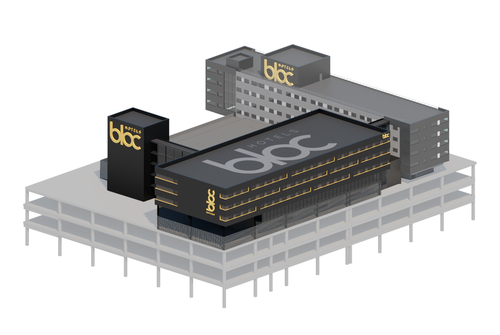 Gatwick Airport will gain an iconic hotel extension in the heart of the terminal building, as part of plans submitted today.

Since opening in 2014, Bloc Gatwick has been operating at more than 90% occupancy and the new hotel wing will create even more of the rooms loved by smart travellers.

Bloc’s extension will provide a mix of accommodation suited for all, from families to business travellers and will deliver the same high-quality rooms at affordable prices.

The design will create a relaxed but modern environment and will almost double the capacity of Bloc’s flagship hotel, increasing bedroom count to 473.

Its aluminium and glass design will appear to float above its base and windows of the new wing will offer stunning runway views. The roof-top extension will be built above the South Terminal and linked to the existing Bloc Gatwick by a passenger bridge.

Rob Morgan, Managing Director at Bloc Hotel Group, said; “Gatwick Airport has been home to Bloc Hotels for five years and we are delighted to be part of the fabric of this fabulous travel hub. There is unprecedented demand from passengers wanting to stay with us.”

“It’s fantastic to work with Gatwick and give even more guests a direct, easy connection to departures. We pride ourselves on giving guests everything they need to sleep, shower and step out fresh and ready for their flight.”

Emma Rees, Head of Property, Gatwick Airport, said: “Bloc’s entrance sits just a few metres from South Terminal’s Departures, so extending the hotel will provide even more of our passengers with super-fast, convenient access to our terminals. The hotel is a fantastic option for travellers with an early flight and many of the new rooms will also offer guests spectacular views of the busiest single runway in the world.”

The Bloc Gatwick extension is expected to commence operations in 2021.

About Gatwick Airport.
Gatwick is the UK’s second largest airport. It serves more than 230 destinations in 74 countries for 46 million passengers a year on short and long-haul point-to-point services. Gatwick is also a major economic driver and generates around 85,000 jobs nationally, with 24,000 of these located on the airport.

In May 2019, a new long-term partnership was formed with VINCI Airports who purchased a 50.01% stake in the airport. This partnership sees Gatwick Airport integrate into the network of VINCI Airports, the leading private airport operator in the world, which manages the development and operation of 46 airports across the globe. Served by around 250 airlines, VINCI Airports’ network handled 240 million passengers in 2018 - including traffic at London Gatwick. VINCI Airports develops, finances, builds and operates airports, leveraging its investment capability, international network and know-how to optimise performance of existing airport infrastructure, facility extensions and new-build construction projects.

Global Infrastructure Partners (GIP), which manages the remaining 49.99% interest in Gatwick, is an independent infrastructure investor that makes equity investments in high quality infrastructure assets in the energy, transport and water/waste sectors. GIP has US$68 billion of Assets under Management. Its 41 portfolio companies operate in over 51 countries with more than 67,000 employees and generate annual revenues of circa US$51 billion.