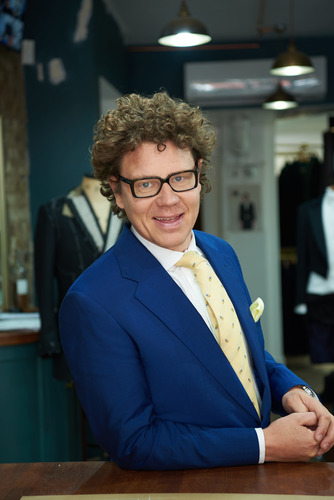 Regarded as one of the finest gentlemen’s outfitters in the UK, Oliver Brown is the home to classic British ready-to-wear menswear and exquisite bespoke tailoring. Proprietor Kristian Ferner Robson brought the company out of liquidation in 1998 when it predominantly sold women’s country clothing. He has since transformed the business into a multi-million-pound success, with 50% growth predicted for 2019, building on the previous year’s growth of 50%.

The current Brexit-woes experienced by the high street are not affecting Oliver Brown - with more customers from Europe than ever before and spend per customer increasing significantly over the past two years, annual turnover is set to hit £5million. With worldwide appeal, Oliver Brown also attracts clients from the UAE, Australia and America –US trade is experiencing particularly strong growth, supported by the Breeder’s Cup.

At the helm of the business, Ferner Robson has used his knowledge, expertise and love of tailoring and formalwear to transform Oliver Brown’s offering. A wise decision in the early days to introduce the option to hire formalwear of the highest quality now sees Oliver Brown on target to hire over 2,000 morning suits over Royal Ascot week alone. Men’s suiting remains the key sector for the brand, with the number of suits sold growing exponentially with a 275% increase projected for 2018/19 compared to the previous year.

One of the most significant developments for their tailoring in recent years has been the store expansion – doubling in size in late 2017 – which provided space for a dedicated bespoke department. The decision to expand bespoke tailoring at Oliver Brown was borne out of the success of the existing alterations service and the brand hasn’t looked back since. Oliver Brown’s revenue from Bespoke services alone is on course to reach £750,000 by the end of 2019.

Oliver Brown boasts the most comprehensive collection of top hats in the world, as well as being an Official Licensee of Royal Ascot which contributes over £1million to the brand’s annual turnover. This licensee agreement activation was one of the greatest accolades for Kristian; as someone who spent his childhood attending race meetings with his father, this was ultimately where his interest of top hats and racing started.

Further establishing the brand in the racing world, many international champion jockeys and trainers come to the store specially to buy their suits for prestigious race meetings. Oliver Brown is also the official sponsor of the Chelsea Thoroughbreds syndicate, with Kristian himself owning a stake in a racehorse.

Alongside his love for horse racing and an extremely successful career in tailoring, Kristian also has a passion for property, having worked on a portfolio across the British capital. Kristian sought to secure an offer on his current house, a charming mews in Ladbroke Grove, by offering to make the suits for the agent who sold it to him. The interior was designed by Alberto Marcos Flores who created a scandi-inspired feel throughout by installing a living wall and digging a basement extension. Kristian’s property is currently listed with Strutt & Parker.

For more information or to arrange an interview with Kristian Ferner Robson, please email kaylie@bloxhampr.com or call 01452 346 466.

Oliver Brown’s key category, men’s suiting, is growing exponentially with a 275% increase projected for 2018/19 compared to the previous year

Oliver Brown have more customers from Europe than ever before

US trade is experiencing strong growth, supported by the Breeders Cup