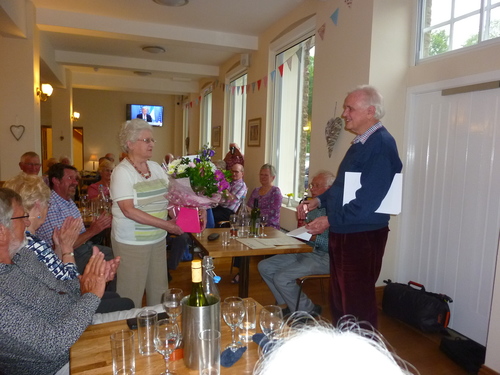 A rambling group has marked its 90th anniversary with a little help from a guest of honour of the same age!

Renowned long-distance walker and trails guide author Ron Scholes was the VIP at the Hanliensian Rambling Club’s celebrations in June, 90 years after its first walk took place. The club marked its milestone anniversary with a number of walks in the beautiful Dane Valley, followed by a two-course meal at Gradbach Mill, Buxton, with Ron, accompanied by his wife Jeanette, entertaining guests with tales of his adventures.

The inaugural trek of the Hanliensian Rambling Club (HRC) was a 25-mile walk from Leek to Butterton and back, which took place on June 16 1929. Ron, who was born in the September of the same year, joined the club in 1945 aged just 15, and has been a member ever since.

Retired headteacher Ron, who lives in Endon, Stoke-on-Trent, and is a Fellow of the Royal Geographical Society, said: “I was delighted to be the guest of honour at this wonderful celebration of a club I’ve long been associated with. I joined the Hanliensian Rambling Club as a schoolboy, when it restarted after WWII, and from the age of 16 I led walking tours for Danish and Swiss visitors organised by the Peak District area of the Youth Hostel Association.

“These tours foreran 15 years of leading YHA Foreign Walking Tours to France, Germany, Italy, Holland, Luxembourg and Poland. My first one to Poland was quite memorable, when we were detained by the East German border officials after passing through Checkpoint Charlie. They did release us eventually, and allowed us to proceed by train from Berlin Ost Station to Warsaw.

“It was lovely to be able to share some of the stories with guests at the dinner, and I was also pleased that the venue was Gradbach Mill. Until quite recently, it served for many years as a youth hostel for the YHA and was where I stayed during my long walk from Cape Wrath to Land’s End.”

HRC spokesman Peter Johnson said: “The 90th anniversary event was a huge success, with so many things going incredibly well - including the walks and the weather! The location was superb; the Three Shires Head is near the spot where Cheshire, Derbyshire and Staffordshire meet, and the bridge with the waterfall below must be the most photographed spot in the whole of the Peak District!

“The highlight of the day was Ron’s talk about the history of the club and his experiences as a member of the Hanliensians over the last 75 years. We all thoroughly enjoyed his tales and felt very fortunate to have him as the guest of honour.”

A great friend of the legendary fellwalker Wainwright, Ron has written many walking trails books for publishers including Landmark and Sigma Press, as well as devising his own long-distance route, the Ravenber Way, between Ravenglass and Berwick-upon-Tweed. In 1990, Ron completed a 1,360-mile trek from Cape Wrath, in north west Scotland, to Land’s End, and he has also walked the Cambrian Way through Wales and completed a 450-mile walk from Norfolk to Hadrian’s Wall in 2010, aged 81.

The HRC was founded by a group of ex-pupils from the old Hanley High School in Stoke-on-Trent. Known as the Old Hanliensian Club - Rambling Section, its first walk from Leek was repeated in 1979 and also in 1999, to mark the club’s 50th and 70th anniversaries. As well as walks in and around Staffordshire, early members made an ascent of Snowdon in 1932 and Great Gable in the Lake District in 1933.

Ron, who will mark his own 90th birthday in September, is currently working on his next book, A Pennine Odyssey – Walks and Ways. The long-distance route is based on Wainwright’s idea for a ‘purely Pennine Way’ and on the many conversations the friends enjoyed, including at the Kendal Green home of ‘AW’, as Wainwright was known. A Pennine Odyssey is due to be published by Sigma Press later this year, with a foreword by Hunter Davies.

Photo 2: Ron setting off on his 450-mile walk from Norfolk to Hadrian’s Wall in 2010, aged 81.
Photo used with kind permission of the Staffordshire Sentinel

Ron’s 90th birthday will be on September 18. He has a great many lively stories about his early hikes - including setting off into the Peaks with his sandwiches in his school rucksack! - and is the ideal subject for a nostalgia feature.

Ron’s walking books are published by Sigma Press and Landmark. Examples of Wainwright’s letters to Ron are included in the book The Wainwright Letters (2011), edited by Hunter Davies.

Please contact Rebecca on 07950 060613 or chat@chatterboxcomms.co.uk to interview Ron or for further details.