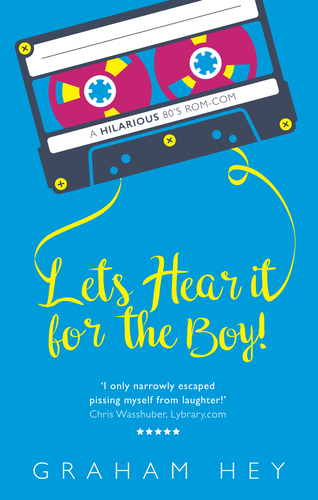 I wanted to write a feel-good, funny read, perfect to take on those summer holidays abroad

Get out your Jane Fonda leotard and pink leg warmers, the 80’s are back! ‘Let’s hear it for the Boy’ is the brilliant new 80’s set rom-com by Graham Hey, one of the UK’s hottest comedy writers! It really is the feel-good book of the Year!

Taryn Johnston, Executive Director of Chronos Publishing says: “Sometimes an amazingly funny book lands in your lap and you know you have to publish it, this wasn’t one of those times, but it’s a good read… ”

When twenty-something James Valentine pays an unscheduled visit to a fortune teller in Whitby, he is told that he’s going to meet three women that will influence his life in ways that he could never imagine!

It’s the fabulously funny story of a struggling magician trying to find true love somewhere amongst the gay bars, working men’s clubs and cake shops of a West Yorkshire town.

A fruit cake, an International drugs dealer and the Heimlich Manoeuvre play pivotal roles in this tale of romantic failure set in the un-glamorous locale of Huddersfield.

Author Graham Hey says, “I wanted to write a feel-good, funny read, perfect to take on those summer holidays abroad. I also wanted it to be a cool rom-com that men would want to read too!”

Graham adds that every rom-com should have a happy ending, and he’s confident that readers won’t be disappointed with the climax of Let’s Hear it for the Boy! He says, “I hate it when you read a book and the ending is very vague! After you’ve invested all that time, you want the story to be satisfying. I’m personally not a big fan of when author’s leave the ending open for YOU to decide what happened!”

Graham Hey is one of the most sought after comedy writers in the UK: He’s previously had his own comedy section in the National press and written for some of the world’s top performers! He has also worked as a ghostwriter for one of the world’s most successful screenwriters. He lived in Huddersfield during the 1980’s, but never, ever attended a gay bar dressed as Adam Ant! Honestly!

Chronos Publishing is an independent publisher and part of the FCM Group, which also incorporates independent publisher FCM Publishing & FCM Media, an online marketing agency. Here at Chronos Publishing we specialise in telling stories. Whether autobiographical, biographical or novel we understand the value in ensuring your book reaches the right audience. We believe that storytelling days are far from over and we champion authors with incredible stories and fantastic imaginations.