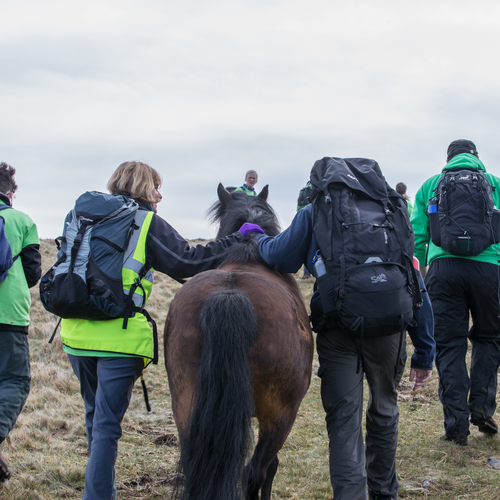 At 7.30am on Saturday 12th May 2018, Dartmoor ponies George and Smartie led the way at the start of the Ten Tors Jubilee Challenge from Okehampton Army Camp on Dartmoor, in what is one of the biggest outdoors adventure events for young people of all abilities in Britain today.

The ponies were the stars of the Dartmoor Pony Heritage Trust’s ‘Fresh Tracks’, an equine assisted learning programme created by the DPHT for the Army as a special category of the Jubilee Challenge. It is for young people with a range of complex, challenging life issues - from both mainstream and special needs schools – who train hard to lead Dartmoor ponies across the open Moor.

In the end, it was not just the students who were helped by the ponies: Leader Dru Butterfield struggled with suspected cellulitis half way round the course and credits her students – and Dartmoor pony George – with ‘carrying’ her much of the way to enable her to complete the gruelling 15-mile trek.

Dru was not the only one overcoming health issues on the day: professional photographer Malcolm Snelgrove, who has given his services free as a mentor and to photographically ‘diarise’ the entire training process, had a stroke in December 2017. He always said: “Getting to Fresh Tracks 2018 was my first main mile stone on the road to recovery. Though harder than I expected, it was very rewarding and felt like a huge accomplishment for me too!”

Many of the 12 students aged 14-16 from Devon’s Ivybridge Community College and Ratcliffe School at Dawlish admitted they would never have completed the event without the relationships with and motivation provided by George and Smartie.

Not every student who started the programme managed to complete it. But the achievement brings enormous rewards for each one – and benefits to their families, schools and even their future work prospects. Fresh Tracks has helped their personal development and enabled them to gain transferrable life skills in a way and in an environment that they might otherwise be unlikely to experience.

Students underwent 10 weeks of intensive training to learn to handle the ponies; walking safely in the Moorland environment; first aid and teamwork. They were supported by experienced pony handlers, moorland guides, first aiders and their own schools’ support staff, as well as members of the DPHT Volunteer Team.

Fresh Tracks has been created, coordinated and delivered by the Dartmoor Pony Heritage Trust (DPHT) at the request of the Army, as part of its ‘Ponies Inspiring People’ equine assisted learning programmes.

Says Dru Butterfield from DPHT: “The pressures on students are increasingly heavy and we are seeing more and more impact on their opportunity to learn and their motivation. Working with ponies enables them to be more independent and prove to themselves that they really CAN achieve if they set their minds to something. Dartmoor ponies have shown once again that their robust, gentle nature is perfect for equine assisted learning; they demand the focus and respect of their handlers but give great reward when students can deal with their pony on the open moor. “

Here are some quotes from those who took part this year:

Caron Russell, Ten Tors Trainer at Ivybridge Community College: “The change I have seen in these students is quite remarkable. Fresh Tracks has helped them with peer relationships and learning how to work as part of a team; it has also shown some that are natural leaders but who may never have thought they could take any responsibility. We have seen new and positive characteristics and skills that will help every one of them in their future endeavours and employability”

Parent: “They find it tough to face things that are hard and worry about failing, so avoid trying. The ponies have made such a difference to their belief in themselves that they can do something they really thought impossible, working with people they didn’t know, in a world that is totally unlike their daily life. I just want them to take this experience and use it to get on with their life and believe they can do more.”

Student: “Every time we were training, I found it hard and sometimes I didn’t want to go at all. Today was exhausting but I could not let everyone down – or let myself down. If I don’t complete, they might not either. I am proud that I made it in the end and I am proud that I did something for myself.”

Lieutenant Colonel Crispin d’Apice of the Army’s HQ SW Region is the lead organiser for Ten Tors: “The Fresh Tracks element of the Jubilee Challenge is a particularly rewarding part of the event which we are proud to deliver in partnership with the Dartmoor Pony Heritage Trust. We congratulate all the participants and hope they had an enjoyable and memorable challenge.”

The primary aim of the DPHT is to preserve the traditional single-coloured Dartmoor pony on Dartmoor. We work with their breeders, mostly local farmers, to raise awareness of the issues facing the breed’s survival on Dartmoor and to promote its temperament, so adding value to them and encouraging people to buy them as all round family ponies and for conservation grazing.

For further information about its work and its ‘Ponies Inspiring People’ programmes, including ‘Fresh Tracks’, please see the website – www.dpht.co.uk

Follow Malcolm’s journey and his work with the Stroke Association at http://www.stepoutmoor.com/

Without the support of the following companies, organisations and individuals, it would not be possible to equip, train and care for the students or the ponies taking part in Fresh Tracks:

Malcolm Snelgrove, professional photographer – for covering the training and the event, supported the DPHT and individual students and provided the most incredible record of achievement – all for free

Gift your Gear: Gift Your Gear is an independent nationwide initiative that provides donated outdoor clothing and equipment to UK community organisations, youth groups and charities working with young people in the outdoors, enabling others to benefit from life changing experiences in the great outdoors, regardless of their circumstance. An award-winning initiative founded by Sarah Howcroft of Rohan Outdoor Clothing

Stringer Equine vets: based at Poltimore, Exeter, and at Moorlands, Whiddon Down, Okehampton for cover on the day of Ten Tors

Dewerstone: for designing, printing and then donating the fantastic Fresh Tracks t-shirts

Members of the Co-op, using their cards at the Bovey Tracey stores: as one of the Co-op’s ‘Local Charity Scheme’ beneficiaries, we have benefited from a wonderful donation towards the costs of Fresh Tracks

And last but not least – to Colonel Andrew Dawes and the staff at the Army’s Headquarters South West and to the personnel from the Royal Navy, Army and Royal Air Force for giving so much of their time, energy and enthusiasm to help the students have a great experience and come home safe.

The DPHT's mission is to preserve the indigenous Dartmoor Pony from extinction and to maintain its presence on Dartmoor, thus protecting our heritage for future generations.