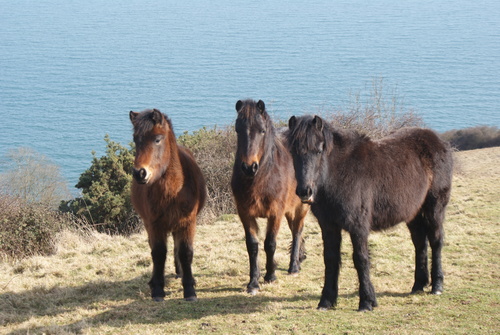 A partnership between the RSPB, Dartmoor Pony Heritage Trust and Dartmoor farmers Margaret Rogers and Michael Lamb from Widecombe-in-the-Moor, bringing Dartmoor ponies to the Devon coast as conservation grazers, has helped to ensure that numbers of the rare Cirl Bunting on the site have more than quadrupled in the last 10 years.

According to Cath Jeffs from the RSPB: “The RSPB has been loaning Dartmoor ponies to graze the steep but flower-rich fields at its coastal reserve, Labrador Bay (between Shaldon and Maidencombe) since winter 2009/10. Without this vital grazing this special habitat would disappear under bracken and scrub and its value for our wonderful Devon wildlife would be diminished. It is not just plants that are benefiting from the ponies’ management but also another Devon speciality, the Cirl Bunting.

“This colourful small bird of farmland has a deep connection with Devon; it was where they were first recorded in 1800 and from where they expanded to become a familiar species around villages and farms throughout southern England. However, its fortunes suffered a setback after WW2 when changes in land management led to a loss of feeding and nesting sites. Cirl Bunting underwent a catastrophic decline and by the early 1990s numbered less than 120 pairs and was found nowhere else in the UK other than south Devon.
“Since then a Species Recovery Project has seen numbers increase and in 2016 a milestone of 1000 pairs was reached. At Labrador Bay we have seen numbers increase from 3 pairs before purchase in 2008 to almost 30 pairs now.

“The Labrador Bay Reserve has played a major part in the recovery and is a wonderful place for people to experience these still rare birds. However, it’s not just the birds that people like to see as the Dartmoor ponies have become a real visitor favourite. As well as creating the perfect conditions to provide invertebrate rich grassland for Cirl Buntings to find lots of prey to feed their chicks, the ponies themselves are part of what makes the reserve special. It seems fitting that these two iconic – but endangered - Devon species should be helping each other to thrive.”
Ponies – one element of the methods used to manage these areas - are suited to the environment even in the winter because they are robust and hardy, graze a broad variety of plants and thrive on the sparse, steep grassland and will even munch the scrub. They have been ideal where grassland is under restoration and unsuitable for other stock such as cattle or sheep. Cattle graze the majority of the reserve in the summer and create the varied structure favoured by Cirls.

The ponies graze the RSPB site from January to May. Each year their owners Margaret and Michael select ponies of the right age and attitude for the site and deliver them to the RSPB and its Wardens.
Says Margaret: “We provide sensible ponies that are trained to follow a bucket, can be handled in a pen but are not friendly with walkers or dogs that have right of access. They are all bred within the Dartmoor Pony Moorland Scheme so are very much part of the conservation work to retain the unique bloodlines from the Native Dartmoor Pony. We have a longstanding and wonderful relationship with Cath, John and the volunteers on this site – not least the shared interest in the ponies and their future, but in the wonderful work being done to restore this lost bird population.”

Recently the latest Labrador Bay team of ponies arrived to do their bit for conservation. John White the RSPB Volunteer Warden who checks the ponies says “We are delighted to have ponies back again to help manage and enhance our reserve. Every day is a good day when you can spend a few minutes with a Dartmoor pony or three! I am looking forward to getting to know Sweet Chestnut, Willow and little Lightning”.

The Dartmoor Pony Heritage Trust acts as coordinator for the sales, made via its website or through phone enquiries, matching buyers with suitable ponies and breeders – at no charge to those involved. All the ponies have had basic handling provided free by the DPHT, or have had a good start in life through the time invested by their breeders.

For free advice on conservation grazing and whether land/environments are suitable for ponies, or to find out more about the work of the DPHT, see the website www.dpht.co.uk or call the DPHT Centre on 01626 833234.
Editor’s notes:
1. The RSPB is the UK’s largest nature conservation charity, inspiring everyone to give nature a home. Together with our partners, we protect threatened birds and wildlife so our towns, coast and countryside will teem with life once again. We play a leading role in BirdLife International, a worldwide partnership of nature conservation organisations.
2. The Dartmoor Pony Heritage Trust (DPHT) is a registered charity established in 2005 to protect and conserve the Dartmoor Pony on Dartmoor. The DPHT works closely with Moorland Pony Keepers, providing services to add value to the ponies, including handling semi feral youngstock, so they can be given a good start to lives in appropriate equine homes.

The DPHT's mission is to preserve the indigenous Dartmoor Pony from extinction and to maintain its presence on Dartmoor, thus protecting our heritage for future generations.