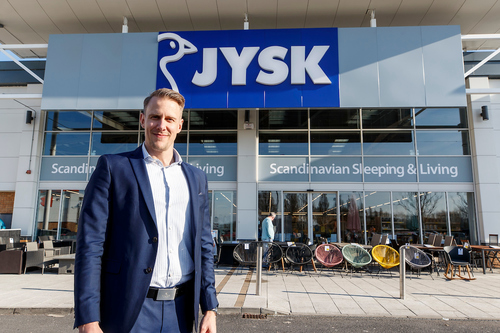 • Total sales in JYSK UK & Ireland reached €41M, an increase of 74%
• JYSK UK & Ireland posts record €2.9M (+69%) improvement on results for FY 2019/2020
• JYSK Ireland reports positive EBIT in first full fiscal year
• Growth is owed to its Irish and UK organisations merging this year as well as soars in online sales, new store openings and a general uplift in consumers investing in their homes
• 860,000 customers made a purchase during FY 2019/2020, an increase of 55%
• Outlook is extremely positive for FY 2020/21 says Country Manager for JYSK UK & Ireland
• Five new UK stores and a further eight to open in Ireland by end of next financial year as JYSK expands its footprint and creates more jobs

[11:00 GMT, 26th November 2020] Danish furniture and home furnishings brand, JYSK has announced today record results in the UK & Ireland during the financial year 2019/2020, with total sales reaching €41M, an increase of 74% on 2018/2019. Despite a challenging year for the retail market, with forced store closures during lockdown periods, over 860,000 customers (a 55% YoY increase) in the UK & Ireland chose to shop at the Scandinavian retail chain to improve everyday life in their homes, confirming a UK-wide trend that has seen homewares sales soar.

Whilst the challenges many retailers faced during 2020 were mostly financial, the behind the scenes logistics were also tested for JYSK as it received a soar in demand. With shopping choices limited, many customers turned to e-commerce; almost a quarter (24%) of JYSK’s total annual orders were made online. This sudden increase meant that capacity at warehouses and distribution companies were stretched due to lack of warning of store closures and minimal time to prepare for the shift to online orders. The company rapidly responded to keep up with the demand and, as a result, is pleased to announce there were no redundancies or staff layoffs despite store closures as a result of the pandemic. In fact, increasing sales and improving trends as the year progressed has led to an increase in the number of employees since stores reopened during the summer.

In the face of these challenges, JYSK is therefore delighted with its record results. Country Manager JYSK UK & Ireland, Roni Tuominen said: “Whilst it has been a tough year for retail in many ways, we are very pleased with the results announced today. In Ireland, we were able to contribute positive EBIT after just one full financial year. Whilst the EBIT result is not yet at our target levels, to be able to achieve this positive result alongside the significant level of investment and expansion we have done is quite remarkable.”

The company, which announced the merger of JYSK UK & Ireland earlier this year, said that synergies achieved, would help to improve overall profitability for the company. “We’ve seen great improvements and positive trends in the UK towards the latter part of this year following the merger of the UK & Irish organisation. This turnaround project that started in June has already resulted in significant growth on our sales and customer numbers. UK customer numbers alone grew by 55% compared to last year”, added Roni.

With such positive results and despite the challenges of the current pandemic, Roni Tuominen explains that JYSK will continue to push forward with the expansion plans of opening a further five stores in the UK and eight in Ireland this financial year. “We are very confident in both the UK & Ireland market and we will continue with our expansion plans over the next 12 months. The appetite is there for home furnishing products amongst our customers, perhaps now more than ever as the nation continues to spend more at time at home and invest in creating comfortable, ‘hygge’ inspired interiors that our synonymous with our Danish heritage.”

The positive results from JYSK in the UK & Ireland are part of a greater success story, as JYSK, which in total operates more than 2900 stores in 51 countries, announced record global turnover of 4.1 billion EUR.

With many people spending more time at home than usual, creating the perfect space is high on many people’s priority lists. JYSK (pronounced YOOSK) is well known for high quality, on trend products for the home, from the bedroom to the garden. The brand has earnt a worldwide reputation of expertise and knowledge in sleeping culture and specialises in sleeping products created by experts, from mattresses, duvets, and pillows to bedframes and bases. JYSK’s Scandinavian design ethic and stylish approach to interiors has made the brand known and loved across the world.

About JYSK
JYSK is an international chain of stores with Scandinavian roots that sells everything for the home. The first store opened in Denmark in 1979, and today JYSK has more than 2,900 stores and 26,500 employees in 51 countries. In Germany the stores are called Dänisches Bettenlager – in the rest of the world JYSK. JYSK is a family owned company founded by the Danish tradesman Lars Larsen, who owns a number of companies with a total annual turnover of 4.25 billion EUR. JYSK's turnover is 4.1 billion EUR.