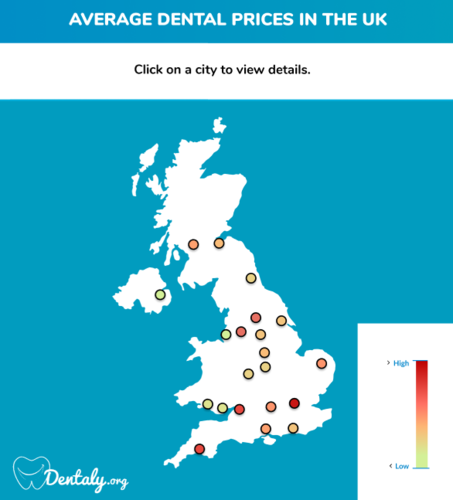 A new report undertaken by oral care specialists Dentaly has produced some startling results regarding the varying cost of dental treatments in different UK cities.

The document highlights how residents face a postcode lottery when it comes to UK dental charges, with people living in Liverpool, Wales, and Northern Ireland benefiting from the best prices on average.

According to the researchers at Dentaly, London is the most expensive city in the UK for dental care, but Bristol and Plymouth are not far behind.

The statistics show that the average cost of a dental checkup in the UK is £63, but it is possible for patients to find appointments for as little as £20 if they shop around.

The cheapest checkup listed in the research was in Birmingham at £20, and the most expensive was in Cardiff for a whopping £180!

Sheffield had the lowest average prices for dental checkups, at £48, while the average in Plymouth is almost double, at £89.

When it comes to dental crowns, the research conducted by Dentaly found the cheapest place in the UK to get one was Birmingham at £350, but the same procedure could set people back as much as £1,100 if they choose a dentist in Edinburgh.

The average cost of a dental implant across the entire UK was £2,339, but those willing to travel to Liverpool could pay as little as £1,400. Unsurprisingly, the most expensive dental implants are in London, and they can cost people as much as £3,600.

Teeth whitening is a popular procedure, but depending on where a person lives in the UK, they could pay as much as £835 in London or as little as £285 in Belfast. The nationwide average is £477 according to the new Dentaly report.

Liverpool and Belfast are the cheapest cities on average to receive all forms of dental treatment in the UK.

Dentaly has published the report on their website with graphics and a useful interactive map of the UK that allows users to learn more about dental charges in their city.


The full report is available on the Dentaly website here: https://www.dentaly.org/en/dental-charges-uk-report/