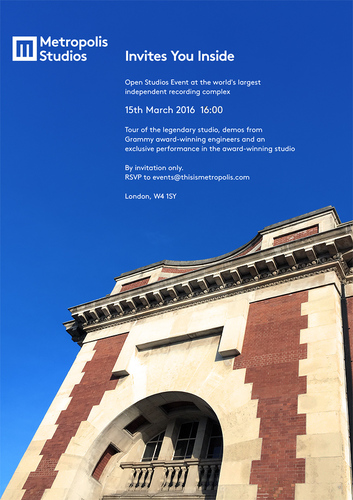 The iconic Metropolis Studios in Chiswick will be host its first ever Open Studios event on Tuesday, 15th March.

This will be an opportunity for press to see inside the world's largest independent recording facility, the place where 50% of the UK's Top 40 Chart is recorded, mixed or mastered, home to the Music Producers Guild's Mastering Engineer of The Year, John Davis (Years & Years, FKA Twigs, Royal Blood & Led Zep), and where the team of engineers worked on 27 of the BRITS nominations - more than any other studio on the planet.

During the Open Studios event press will be given a tour of the studio and demonstrations by Metropolis' Grammy-award-winning engineers and mastering engineers, witness some of the cutting edge tech used as the world's only studio to house its own labels, publishing company, video production team and academy. Other demonstrations at the event will include binaural sound and 3-D hologram displays. before