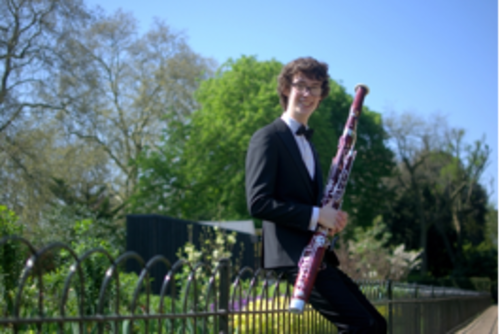 He clearly demonstrates real talent and ambition, which is exactly what the Foundation was set up to support

A young musical prodigy is a step closer to achieving his dream of playing with the London Symphony Orchestra thanks to a donation from the Everest Lewis Golden Foundation.

At just 19 years old, classical bassoonist Ashby Mayes has already achieved more than many musicians do in a lifetime, playing at the opening ceremony of the 2012 Olympics, becoming the first bassoonist leader of the National Youth Wind Orchestra, and touring overseas in Spain, Poland, Germany, Holland and Switzerland.

But there is one thing that has been holding Ashby back. He explains, “In order to take my career to the next level, I need to upgrade to a professional instrument. The majority of bassoon professionals play on Heckel bassoons. They have a certain resonance and a certain character; they’re top of the market.”

However, there is a 12 year waiting list for a new Heckel bassoon, which, as Ashby points out, is longer than the amount of time he has been playing the bassoon. This high demand means that even second-hand Heckel bassoons are priced at over £30,000.

Whilst his mother, Caryl, is enormously supportive of his endeavours, she is a single parent who has been unable to work for the past ten years due to her disability, so Ashby relies on scholarships, grants and the income from two part-time jobs to cover the cost of his training. He has been saving and fundraising for a new bassoon for some time, so when Ashby heard that the Everest Lewis Golden Foundation might be able to help, he was quick to apply.

The Foundation, which was officially launched in early 2018 by home improvement company Everest, provides financial support to help ambitious applicants fulfil an extraordinary talent or personal challenge. It was named in honour of one of the company’s founders, Lewis Golden OBE, who passed away towards the end of 2017. A war veteran, accountant and philanthropist, Lewis Golden was an active and energetic member of the community who embraced every opportunity, striving throughout his 94 years to achieve success and support others.

Lewis Golden’s son, Jonathan Golden, was one of the judges on the Foundation panel. He said that Ashby’s application had stood out to the judges, commenting, “Ashby has put in an incredible amount of effort to raise funds for his instrument and we’re very happy that the Foundation can help him achieve his target so he can find his ideal bassoon. Ashby clearly demonstrates great ambition as well as remarkable talent, and we’re delighted to be able to make a difference in helping him to achieve his dream.”

Lucy Moody from Everest added, “We are delighted that Ashby was chosen by the judging panel as the recipient of this round of funding from the Everest Lewis Golden Foundation. He clearly demonstrates real talent and ambition, which is exactly what the Foundation was set up to support, and we wish him all the very best towards achieving his goals, both now and in the future.”

The Foundation panel agreed to donate £5,000 to Ashby, which means he has now raised enough money to buy a second-hand Heckel bassoon… once he finds the right one. Ashby’s search has already taken him to Amsterdam, Wales and Poland. He has tried several bassoons to date, but none has proven to be quite right. “There will be a real gut feeling when I play ‘the one’,” he explained.

Commenting on the difference that the donation has made to him, he said, “I’m extremely grateful for the support from Everest because it’s made it financially possible for me to take the next step towards my goal.”

Once he does find the perfect bassoon, Ashby is planning to put on a recital for everyone who has donated towards his cause, including teachers, friends, family members and Everest. “I like to perform with friends and am part of a quintet at college, so there’ll be some chamber music, some duets, solo pieces and hopefully I’ll be premiering a new composition that a friend is writing. I play a wide range of classical music, from early Baroque to modern contemporary.”

Ashby, who grew up in Hackney, first started learning music at the age of eight when his mum was given a piano. “I just played around on it, making up stuff, but a friend of my mum’s heard me and told her, ‘You’ve got to get that boy some lessons!’ Mum has been incredibly supportive, always looking for opportunities for me.”

As soon as Ashby heard the bassoon, he wanted to play it, although there was one slight problem. “My hands were too small!” he explains. “I had to start off with just two of the main joints of the bassoon, until my hands were big enough to play all four.”

Ashby’s talent and drive set him on a journey that included scholarships to the Junior Royal Academy of Music, Wells Cathedral School and finally the Royal College of Music. He recently played with the Philharmonia Orchestra in London. “My ultimate goal is to have a seat with an orchestra as a principal bassoonist, so it was very exciting to get a taste of what I’ll hopefully be doing in the future.”

Up to £30,000 funding will be available in 2019 through the Everest Lewis Golden Foundation, with two separate entry periods in spring/summer and autumn/winter. The deadline for the next funding round is 30th June 2019 and applications can be made online at www.everest.co.uk/lewis-golden-foundation

Pictured:
Classical bassoonist Ashby Mayes, who has been awarded funding from the Everest Lewis Golden Foundation
• Photo by Alexander Henshaw – Hyde Park, London
•A high-res version of the photo is available upon request (see contact details below)

About Ashby Mayes:
Ashby Mayes is an undergraduate bassoonist at the Royal College of Music where he is a Douglas & Adele Gardner Award Holder, and supported with the Douglas and Hilda Simmonds Award. He studies with Joost Bosdijk and Sarah Burnett and has played in masterclasses with Ole Kristian Dahl, Julie Price and Giorgio Madolesi.
www.ashbymayes.com
www.facebook.com/ashbymayesbassoon

Everest has been at the forefront of innovation in the home improvement industry for over 50 years, offering an impressive range of high quality windows and doors in UPVC, aluminium and timber, as well as conservatories, orangeries and other home improvement products. With factories in Wales and South-East England, each Everest window is custom made and fitted to the exact millimetre. Its products are continuously tested to the latest security standards as well as a number of bespoke tests demonstrating thermal efficiency, strength and more, ensuring that the homes of Everest customers are some of the warmest, safest and most secure in the country.