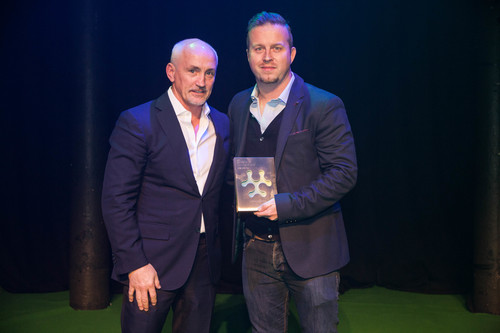 Football Whispers not only ranks transfer rumours with its FW Index, but also powers content for media giants Sky Sports, ESPN and The Sun.

Football Whispers, the world’s first football transfer predictor, will this Thursday (11 May 2017) host an exhibition match at Stadium:mk to celebrate one year on from its launch, and its recent triumph at being awarded Outstanding Start-Up at the prestigious international Sports Technology Awards.

The Sports Technology Awards attract entries from over 30 countries, representing around 70 sports and over 100 brands across 19 award categories. The event was hosted by Mark Chapman, one of the country’s best-known broadcasters and presenter of the BBC’s Match of the Day 2. Against stiff competition, Football Whispers was presented with its award by the legendary boxer Barry McGuigan, and was also shortlisted in the Best Technology for Fan Engagement category, narrowly missing out to NBA.

Kicking off the celebrations at Stadium:mk on Thursday will be former Tottenham Hotspur legends Ossie Ardiles and Ricky Villa as team coaches, and ex-professionals Darren Anderton, Russell Osman, John Salako and Paul Walsh taking part in the action.

Vivion Cox, CEO, commented: “We are delighted to welcome such legends of the game to Stadium:mk to help us celebrate the award and the anniversary of Football Whispers. We feel proud and privileged to have won such an esteemed award - nominations were from across the globe and the other companies in the shortlist were exceptional, so we were really surprised to win.

“Our team has grown considerably over the past 12 months and the passion from within to make a great sports tech company hits new levels daily, so this double celebration really means so much to everyone at Football Whispers.”

Within a year of its official launch, Football Whispers has processed over seven million rumours, from which 9,000 transfers have actually completed and over 115,000 false positives have been identified. The phenomenal success has already resulted in a Sports Technology Award and making the shortlist for five others, including Sports Business, Drum Marketing on Mobile and DataIQ Talent Awards.

About Football Whispers:
Football Whispers is the award-winning,world’s first football transfer predictor. Football Whispers was developed between the Klood suite of businesses and The University of Sheffield OAK (Organisations, Information and Knowledge) Group, developing a unique algorithm to take all of the transfer rumours and calculate the real likelihood of each happening, rating each rumour from 1-5 on the likelihood of it happening. Within a year of launch, Football Whispers has grown to more than two million monthly users across web, iOS and Android and has processed over seven million rumours, from which 9,000 transfers have actually completed and over 115,000 false positives have been identified.

Welcome to Football Whispers. We rank rumours by their reliability. Look for a specific rumour by specifying a player, manager or club...