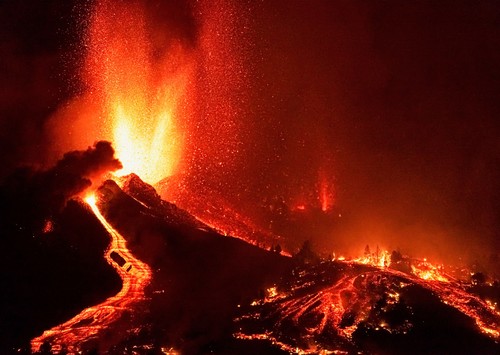 GeoTenerife has produced an impactful new documentary film, Lava Bombs: Truths behind the volcano, that captures the explosive stories behind the crisis and response to the September 2021 eruption of Tajogaite volcano in La Palma, Canary Islands, Spain.

The film, which launches in the USA on October 20 on Apple TV, Amazon Prime and Google Play, reveals the power of the major disaster through the voices of the affected people and emergency managers, scientists and politicians as well as showcasing spectacular 4K footage of the volcano.

The pressures of managing a disaster of this scale in the glare of the world's media is brought into sharp relief, as is the impact on the thousands of citizens evacuated from their homes.

The team at GeoTenerife, led by founder Sharon Backhouse, was on the scene when the volcano erupted, so they were able to record the events as they occurred, providing an authentic record of the course of events. Scottish-based film director Alexander Whittle drove the narrative and was quickly recruited and locally on the scene to witness and record the catastrophe, interpreting the film records with the vision of a ‘big screen’ director. Both producer and director share much respect for those people effected and have created a film with sincere hope for the future for the people of La Palma.

The film has already received numerous positive reviews, just two of which are below.

Nieves Sancheaz, Researcher, Spanish Geological Survey:
“Lava Bombs shows different sensibilities and points of view about the same reality - the eruption - that sometimes are clearly opposed. Achieving this is something very difficult in such a complicated situation.”

"Volcanic eruptions on inhabited lands, like all emergencies caused by natural hazards, can teach us valuable lessons to reduce and manage risk in future. The stories behind and beyond the volcano need to be told. Lava Bombs does this from a social perspective. It transports you to La Palma at the end of 2021 during the latest volcanic event in the Canary Islands that made international headlines. The documentary takes you deep into how everyone felt before, during and after this violent episode. This is a great resource to improve our resilience to catastrophic natural disasters and inform disaster management around the globe."

The team at GeoTenerife has just launched a new Volcano Stories project- an open-access research initiative and resource which brings together intimate testimonies, scientific research and educational resources relating to the 2021 eruption and captures regular updates on post-eruption life in La Palma. The project also fosters collaborations between GeoTenerife and local, national and international scientific institutions.

GeoTenerife is a UK company covered by ABTA that organises tailor-made field trips for universities and schools, based at its historic HQ in Tenerife. It has a ‘no quibble’ guarantee, allowing for flexible refund or rebooking.

The enterprise works with the leading institutions on the island to offer innovative field training camps in a range of disciplines. The camps combine educational elements from leading local experts and hands-on work experience in some truly privileged environments including the Teide National Park and the unique Laurel forest.

All camps are open to international students and run in the English language.

Sharon Backhouse and Alexander Whittle are available for interview on request. High resolution imagery and intensely dramatic B-roll drone footage of the volcano is available on request for broadcasters and multi-media specialists.
Issued on behalf of GeoTenerife by Tina Fotherby at Famous Publicity, email tina@famouspublicity.com and on +44 (0)7703 409 622.