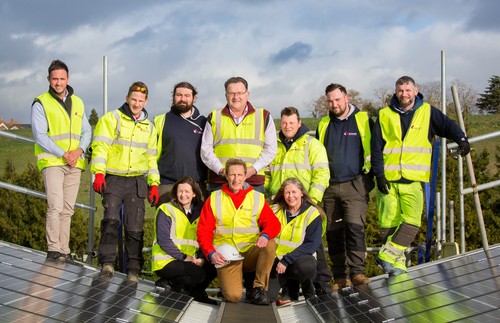 Tomorrow (1st April) is the 1st anniversary of the abolition of the Government’s feed-in tariffs (FITs) for new renewable energy schemes – a financial subsidy that supported the development of green energy generation. Despite predictions that this would halt the growth of clean energy generation, Gloucestershire-based solar power company, Mypower, says this has been a positive benefit for commercial-scale solar power which has since flourished, their own business has doubled in the past year and, thankfully, clients haven’t postponed their installation schemes during the current Covid-19 uncertainties.

When FITs were abolished on 1st April 2019, the renewable energy sector predicted the incentive to build new renewable energy generation schemes would disappear. When the Government severely cut the financial value of the tariffs in 2016, the market all but crashed and >12,000 jobs were lost in the solar power industry subsequently. The fear was that a complete absence would have an even worse effect.

In contrast, Gloucestershire-based solar power company, Mypower (which installed the first solar PV system on a UK cathedral), believed this would actually encourage businesses to turn to solar power as a significant contributor of their daily energy supply because:

• swingeing cuts to the tariff rates in 2012 and 2016 had added unpredictability to the long-term economic benefits companies could expect to receive from solar. Now these financial returns can now be calculated with confidence

• many companies were dissuaded by the amount of bureaucracy involved with FITs and some refused to take subsidies at all as a matter of principle. No tariffs means no red-tape

• the tariffs generated a negative image of solar energy, even though solar electricity costs 60-70% less per kWh than electricity bought from the National Grid: 4-6p/kilowatt hour (kWh) compared to a minimum of 14p/kWh respectively.


During the past 10 months, Mypower have found companies that installed solar systems pre-abolition of tariffs are now ordering new systems despite no tariffs. For example, William Gilders (a waste transport and treatment services company) based in Teddington, near Tewkesbury, Glos, is currently adding 2 new solar power systems to the one installed pre-April 2019. The new ones are cheaper to install and will provide cheaper electricity than previously despite no feed-in tariffs: 4.27p/kWh compared to 5.89p/kWh. Grid-supplied electricity is currently around 14.5p/kWh. Payback time is also shorter and ROI is greater.

“During the past eleven months, we’ve been handling a rapidly growing number of enquiries from companies interested in generating their own electricity, and installed double the amount of solar power compared to the previous year.” said Ben Harrison, MD of Mypower.

“Companies are realising that a solar PV system can help to take control of their energy supply, reduce costs and protect them against the volatility of the energy market. The removal of FITs and its paperwork is part of the reason we’re having a boom in business.” He continued.

“We’re also pleased that our current clients aren’t postponing or cancelling their solar PV schemes. In fact, we’ve received two new good orders in the last week of March and another potential order is about to be signed. On the basis that we average two orders a month, we’re confident that we’re going to continue to see demand increase for clean energy generation in 2020, despite the current global pandemic. Businesses are certainly still looking to reduce their impact on climate change and to reduce their operating costs, so we’re looking forward to our next 10 years and helping them achieve these goals.”

NOTES TO EDITORS
• Mypower is celebrating its 10th year of trading despite 12,000 jobs being lost in the solar sector since 2016 and only a quarter of start-ups (in the general corporate world) reaching their 10th anniversary. Since 2010, they’ve installed 46,200 PV panels producing >10 million kWh each year. This saves 3,300 tonnes of CO2 from being released into the environment annually, the same as planting 16,500 trees each year.

• Mypower designs, supplies and installs solar photovoltaic (PV) systems for the commercial sector, enabling businesses and farmers to generate and use their own electricity on site. It is winner of the National Solar Power Portal Awards 2017, winner in the CorporateLiveWire Energy & Mining Awards 2017, and highly commended in both the British Renewable Energy Awards 2017 and the SW Energy Efficiency Awards 2017. In 2016, the company designed and oversaw the installation of 150 solar PV panels on the roof of Gloucester Catherdral’s nave.