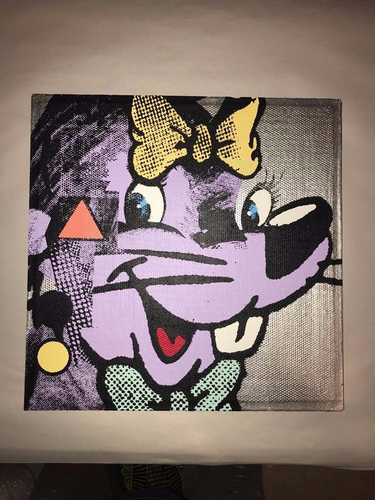 Helium London art dealer Jennifer McCormick and the influential underground art publication Pavement Licker (“King of zines” – i-D magazine) have partnered to create an exhibition during Frieze week. ‘Pavement Lickers’ is a charity collaboration which will offer buyers a one-off opportunity to invest in an original artwork, each one using paving slabs instead of canvas.

The full set of paving slabs will be revealed at the ‘Pavement Lickers’ private exhibition at 32 Portland Place on the evening of Thursday 4 October. A Pavement Lickers book will be released the same evening

Those hoping to buy one of these 50 unique pieces from artists listed below are invited to register their interest at heliumlondon.com

All artworks are the same size, all the same price.

Josh Jones and James-Lee Duffy are the founders of subversive ‘zine Pavement Licker, which recently celebrated a sell-out book and featured in the recent ‘Tearing It Up’ show at Somerset House. The publication’s proposition continues to influence their mission – to give artists a voice and a platform without agenda. Pre-dating the age of social media influence – Pavement Licker has been documenting underground art since the beginning of this century. Contributors to the publication have included Banksy, Pure Evil, Jamie Hewlett, David Shrigley and Shepard Fairey.

With this exhibition, Jones, Duffy and McCormick aim to show exciting artwork while presenting all artists on a level platform.

“It’s always been important for me to encourage clients to step outside of the society norm of knowing the price of everything and the value of nothing. Working with Pavement Licker, I want to bring the old and the new order together to create a one-off show that celebrates art for all.” Jennifer McCormick, Founder of Helium London.

The confirmed artists exhibiting in the show are:

About Helium London and Jennifer McCormick

Contemporary art dealer Jennifer McCormick, 43, is the founder and figure head of Helium London (heliumlondon.com). Jennifer studied sculpture, later establishing the business in 2003 when she set up a gallery next to the British Museum. Fifteen years on Jennifer’s client list includes some of the most influential business figures on the global stage, as well as other high profile individuals. Jennifer is a rarity among art dealers, having developed her business at a time “when buyers could purchase art on credit cards” and has a keen appreciation of what artists and investors need and want from both a creative and commercial perspective. Her time is split between London and Dorset where she lives with her husband and twin boys. Jennifer is available for feature-length interviews, quotes and photo shoots.
heliumlondon.com

Pavement Licker art fanzine, once described as “king of zines” by i-D Magazine, started life in 2003. Wholly independent, the ’zine has documented the explosion of underground art through 10 issues and a coffee table book in the intervening years. This summer they collaborated with Henry Holland in a well-received ‘Pavement Licker X House of Holland’ collection. James-Lee Duffy is creative director and visual artist whose work has been banned on London Underground and worn by supermodels. Josh Jones is a culture editor, writer and journalist. Josh and James are available for feature-length interviews, quotes and photo shoots.
pavementlicker.com
jamesleeduffy.com
joshjoshjones.co.uk

Other notes:
James, Josh and Jenni all shared a studio off Tottenham Court Road 15 years ago. This show sees them reunited for the first time since they all grew up.

About Rett UK
One hundred percent of proceeds from the sales will be donated to Rett UK rettuk.org a registered charity that supports parents of of those with Rett.

“We’re really excited to be part of the Pavement Lickers art show. Rett syndrome is a rare and devastating neurological disorder that affects mainly females, and although rarer, males can have Rett syndrome too. Babies with Rett syndrome appear to develop normally. At around 18 months they start to lose acquired skills such as speaking, sitting unaided and walking among others. Sufferers are left with profound physical and communication disabilities and require lifelong 24/7 care. Throughout their lives most will suffer from epilepsy, scoliosis (curved spine), 95% will not talk and 75% will not walk. Rett UK is the only charity in the UK supporting people with Rett syndrome, their families/carers and professionals. Rett UK helps over 1000 families a year who are dealing with the devastation and loss associated with the syndrome from diagnosis to end of life. Rett UK provide vital help and advice through their telephone and electronic support service, Regional events, local support groups, a network of parent advisors and specialist Rett clinics.” - Rett UK

Becky Jenner, CEO of Rett UK and mum to 21-year-old Rosie, who has Rett syndrome, says: ‘We are a small, nationwide charity committed to giving ongoing support to sufferers of Rett syndrome and their families at all stages of their life. Most medical professionals have not heard of Rett syndrome and so a diagnosis often takes a long time. Rett UK is working to make sure we reach every family affected so they have access to the best possible care, support and advice as they face the challenges of living with this devastating condition.

Further images are available on request