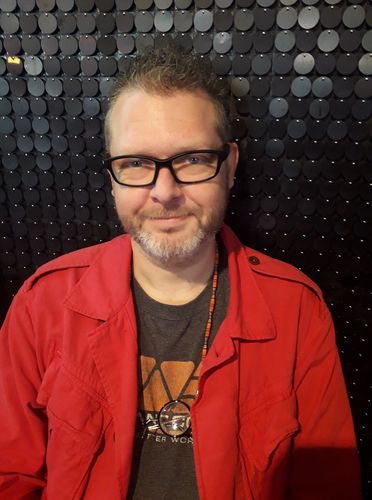 Tottering on the brink of death last year, artist and designer, Richard Gair was offered a combined kidney and pancreas transplant. It saved not only his life and cured his diabetes but proved the catalyst for a glittering new career in fashion which he had always dreamed of.

Launching his debut collection at Manchester Fashion Week on Monday 21 May, his bespoke hand painted leather designs have already been endorsed by big names in metal like Saxon and Iron Maiden. And he has been sought after by advertising agencies and wardrobe departments around the country for television dramas

Richard Gair, 46, from Doncaster quit his job in The Youth Offending Service fearing for his mental health.

Over the following year he spiralled further into depression, fuelled by his deteriorating health.

He also had responsibility of caring for his elderly dad which he continues to do as well as look after his uncle who suffers from learning disabilities, Richard says he put his life on hold, opening an internet development business in Barnsley Media Centre with the view to selling art online with his best friend to tide him over but this happened at a very difficult time for both and the business closed its doors.

"I hid away for 20 years, “Richard said, “I was looking after kids who had a high risk of offending, I was acting counsellor, Mentor and Key Worker for some really desperate and often damaged young people; I was a sponge for negativity I was also a carer for my dad and my uncle was now showing signs of dementia. I was on my own and so frustrated. One day I got a call that my studio was flooded I rushed home to help my dad, who was not physically able to fix it and my car broke down. I just felt despair, I was thinking, there’s nothing else that can go wrong for me. I just wanted it to end. It was like I was waiting for another pile of crap to fall on me.”

“Then someone had heard about me and asked me to paint a Metallica design on a leather jacket, the result was actually very good. It was like therapy and I re-discovered by love of art and design. So, I set up GoGairy Hand Painted Leathers, and I was planning to do Manchester Fashion Week last year, but I was far too ill with complications from my Kidney Failure and Diabetes. Also, my depression was at an all-time low, I had to shelve the plan. It was like one step forward and 2 steps back yet again.”

“Things got so bad that I started to recoil again. I put myself into a self-imposed exile. I painted and wrote furiously to try and ease the desperate feelings I had."

“I was referred to Manchester Royal Infirmary where I was told all about a combined Kidney and Pancreas Transplant. I couldn’t believe it at first! The surgeon literally said that he could cure my Diabetes- a truly evil disease. He had given me hope; for me at that time, the most powerful force in the universe.

“I set a goal, everything would change after the operation"

In August 2017 doctors found a new kidney and pancreas; he underwent the life changing surgery “It was like I had been given a second chance - a new start” Richard said, “And I could even eat cream cake for the first time in twenty odd years!”

Focusing on GoGairy Hand Painted Leathers he sold a few more leather jackets, which retail on average £700, working from his spare room at home. He made enough to buy himself a Rolex watch, another ambition, within months and now he plans world domination.

He works with a team of incredible artists, Bekki, Jenny, Lindsay and Pete, who he said “Saved the brand, saved my sanity and above all, had a big part in saving my life”.

“There’s no one doing exactly what we’re doing so I am just going to go for it. After my ‘darker times’ I’m not letting up. I’ve had the beast on my back and it’s claws in my flesh and shook the damn thing off! I am so excited for what the future brings. I am getting commissions now. I have the team, the talent and the determination. Physically I may look drained but the fire in burning in my belly and the mind is full of creative ideas I am ready to develop. Eventually I want to open a creative studio; a place to fill it with artists, dancers. skaters, foodies, all kinds of creative minds. It will be a hub that people can come together to express themselves artistically. That’s the dream, along with owning and living in a canal narrow boat!”

Richard has never married, saying “My confidence has always been at rock bottom, who would have had me?” He often turns this into a joke saying he is terrified of women! “But I am thinking now that I might be ready and who knows what will happen in the future. I am excited, I feel like the superheroes I draw. There’s no stopping me now”

For interview and more images contact amanda@amandamosspr.uk or call 07916332469

Gogairy Handprinted Leathers will be on the catwalk at Manchester Fashion Week 21 May 2018
www.gogairy.co.uk
www.manchesterfashionweek.com