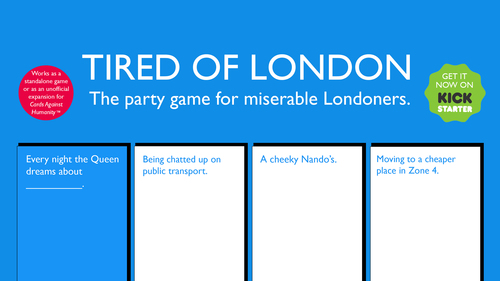 “The party game for miserable Londoners.”

A Cards Against Humanity-type game created just for Londoners launches today on Kickstarter. Tired of London is really simple – one player picks a ‘Question Card’. All the other players anonymously submit one of their ten ‘Answer Cards’. The funniest one wins.

Taking its name from the Samuel Johnson quote, “When a man is tired of London, he is tired of life”, the game is packed full of London in-jokes, making it a great way to alienate your friends who live outside of the M25. It can be played as a standalone game or as an unofficial expansion pack for games such as Cards Against Humanity or Apples to Apples (though we are not affiliated with either).

It has been created by Londoner Jamie Willcocks and, if it successfully reaches its GBP5,000 target, the game will be distributed through his company Lucky Egg Productions Ltd. The more people back it, the more cards will be in the game.

“I saw that other people around the world have successfully released local party games that make fun of where they live,” said Jamie. “And I thought that there can’t be anywhere where people have such a love / hate relationship with their city as in London.”

“Perfect for a drunken night in.”

Tired of London is hugely replayable and perfect for parties, board game nights and drinking games, especially when you want a game that is easy to explain to a room of full of impatient drunk people. The box will also feature a set of ‘blank’ cards so you can add your own questions and answers.

We can’t control what combinations your filthy minds come up with, but as the game contains a few rude words we suggest that Tired of London is suitable for people aged 16 and above, and that you don’t play it with your grandma.

“Board games are really big here at the moment, and Londoners love a bit of dark humour, so I think this city deserves its own game”, continued Jamie.

Tired of London is being launched as a crowdfunded project on Kickstarter at 1pm on Friday May 26th, 2017. If it’s successfully funded after 35 days, the game will be created and sent out to backers in the Summer. Signing up to Kickstarter only takes a few seconds, and you will only pay if the project is successful.

The game is GBP20. For those who would rather print the game at home, or just want to support the project, a ‘print at home’ PDF version of the game is available for GBP4.

The more people buy the game, the bigger it will be. It will feature a minimum of 200 cards, but if we go past the target it will include anything up to 300 – check out the Kickstarter page for details.

Anyone can submit their ideas for cards via the Kickstarter page, and those whose idea makes it will receive a credit in the game and a one-off personalised question card.

More information and visual assets for media (including graphics of all of the cards in the sampler, and example combos) can be found at tiredoflondongame.com

Lucky Egg Productions Ltd was founded by London-based Jamie Willcocks. Tired of London is his first board game and his first Kickstarter project. He lives in Camden, works as a freelance TV Producer in the worlds of gameshows and comedy, and isn’t really tired of London (ok, just in the morning and when looking at house prices).